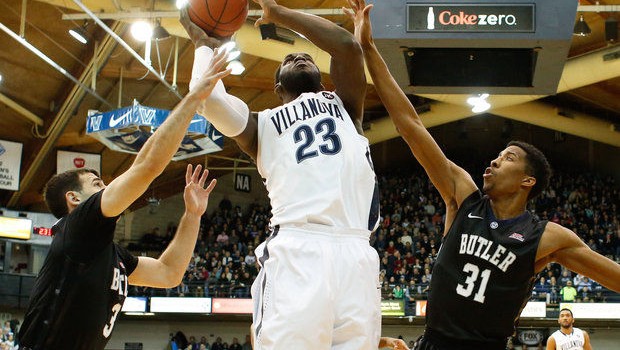 The Cats’ Daniel Ochefu had 10 points and nine boards.

If you want to find a start to a season as good as Villanova’s 13-0 this year you would have to go back to Franklin Roosevelt’s second presidential term.

Ryan Arcidiacono scored 15 points and JayVaughn Pinkston had 13 to help No. 6 Villanova beat Butler 67-55 on Wednesday and match the best start in program history.

Daniel Ochefu had 10 points and nine rebounds for Villanova, and Kris Jenkins scored 11.

The defending champion Big East Wildcats opened an 11-point lead in the first half and then built a second double-digit lead after the Bulldogs pulled within four at halftime.

Butler never managed to rally again after missing 12 of its first 14 shots in the second half.

Villanova leading scorer Darrun Hilliard returned to the lineup after sitting out one game with a concussion. He scored eight points on 2-of-5 shooting.

Pinkston scored off the opening tip, Ochefu scored off a turnover and the Wildcats were up 8-2 in minutes. Arcidiacono hit a pair of 3-pointers early in the game to stretch the lead for the Wildcats and show he might be moving out of his early-season slump.

Arcidiacono, a 6-foot-3 junior point guard, had a knack for hitting big shots late in games for the Wildcats during his first two seasons and he took control as one of their go-to players in crunch time.

But he had been in a slump for most of this season, including a 9-for-33 stretch over five games when he cracked double-digit scoring just once. Coach Jay Wright pinned some of the blame on Arcidiacono’s academic pressures and never lost faith in the guard.

Arcidiacono responded the last two games with nine assists and no turnovers against Syracuse and a 16-point game on 6-of-12 shooting against NJIT.

Arcidiacono assisted on Jenkins’ 3-pointer midway through the second half that made it 48-38, and the Wildcats pulled away from there. Ochefu hit back-to-back jumpers and Pinkston followed with a three-point play that made it 59-43.