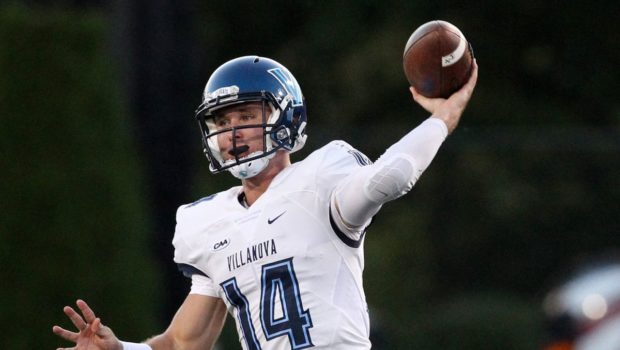 VILLANOVA AND BEDNARCZYK WILL REBOUND IN 2018!

“It was demoralizing. It really sucks the life out of you. We had to have a lot of young guys step into roles they may not have been ready for.” -Villanova quarterback Zach Bednarczyk on last year’s rash of injuries

Here’s our preview of the 2018 Villanova Wildcats football season:

In 2017 Villanova was undermined by way too many injuries. This season will be a do-over for second-year coach Mark Ferrante, who is trying to forge his own legacy of winning after Andy Talley coached his last game in 2016.

One-time CAA Rookie of the Year Zach Bednarczyk is a fifth-year senior who is more than capable of leading the Wildcats back to the playoffs, even if he doesn’t get the hype some his peers do.

The defense should be one of the better units in the CAA, behind Delaware and James Madison.

The playoffs aren’t a lock for a good-not-great team in a deep conference; however, Villanova hasn’t missed the playoffs in consecutive years since the mid-2000s, so history would suggest the Wildcats are due for a major rebound, assuming they can stay healthy.

Villanova should start to pick up some steam in the polls as the calendar closes in on October — particularly if it can pick up a win against Stony Brookon the road.

Games with the top quarter of the CAA — James Madison, New Hampshire and Delaware — will all be challenging, but Villanova could still lose all three of those games and make the playoffs at 7-4.