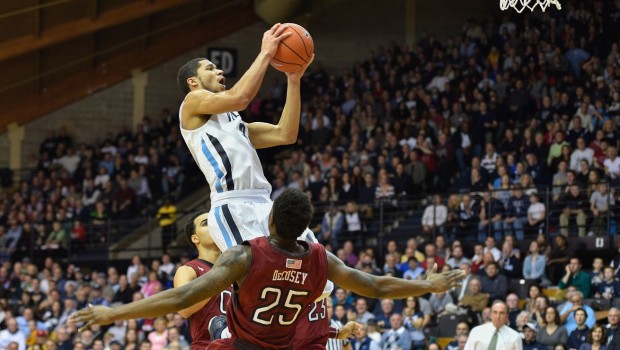 The smart guys in Vegas have made Kansas a 3-to-1 favorite to take the national championship 13 nights from now in Houston.

And they have installed Villanova, which likely will have to beat the Jayhawks in the Elite Eight, to get to the Final Four, at 12-to-1.

Miami is the toughest No. 3 seed in the field and matches up well with Villanova. Both teams are built similarly. They have an army of attacking guards and a rim protector at the back of their defense.

Villanova has the efficiency profile of a champ with both a top-10 offense and defense. The Wildcats also had one of the most impressive second-round performances in a 87-68 win over Iowa.

Nova’s offense has become even more difficult to deal with lately because of the late-season rise of stretch 4 Kris Jenkins. Jenkins is averaging 19.5 points and has made 36 of 76 threes (47.4 percent) over the past 10 games.

Villanova is 1-3 against teams seeded on the top two lines this year. The Wildcats are also very dependent on the three ball for a team that doesn’t shoot it consistently well. Nova attempts 43.7 percent of its shots from deep and shoots at a 35.1 percent clip from behind the arc.

Will Cut Down the Nets if… Jenkins keeps playing out of his mind and the Wildcats stay hot from distance. They made 10 of 19 threes against the Hawkeyes.