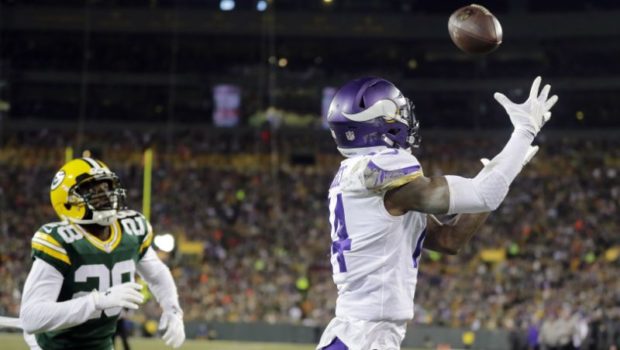 A 16-0 victory over the injury-depleted Green Bay Packers gave Minnesota its first shutout in nearly a quarter-century and kept the NFC North champions in the hunt for a first-round playoff bye.

Stefon Diggs caught a 4-yard pass from Case Keenum just inside the back line of the end zone in the first quarter for the only touchdown. The Vikings (12-3) have already clinched the NFC North and can secure a bye if Carolina loses or ties on Sunday against Tampa Bay.

“Defense played absolutely incredible today, and we did enough. It doesn’t matter how, it matters how many,” Keenum said.

The Vikings forced an incompletion into the end zone on fourth-and-4 from the 14 early in the fourth quarter to turn away the Packers’ last best effort to cross the goal line. Safety Harrison Smith ended another Green Bay drive with an interception at the Minnesota 5 late in the second quarter.

The defense has “played pretty good all year long … Proof will be in the pudding here in a couple weeks,” said Vikings coach Mike Zimmer, referring to the playoffs.

The Packers managed to hold a 239-236 edge in total yards. They were still shut out twice in a season for the first time since 2006.

“I never felt more defeated, more embarrassed by a performance. Yeah, we had opportunities, and we didn’t connect when we did,” receiver Randall Cobb said.

In its defense, the team fielded a lineup that often looked like one that coach Mike McCarthy would send out for a game late in the preseason. The Packers have already been eliminated from playoff contention.

Brett Hundley was 17 of 40 for 130 yards with two interceptions in taking over at quarterback again for Aaron Rodgers, who returned to injured reserve this week after missing seven games earlier in the year with a collarbone injury.

The Packers didn’t have leading receiver Davante Adams, who is in the concussion protocol, then lost wideout Jordy Nelson and tight end Richard Rodgers to shoulder injuries in the first half.

“Injuries are unfortunate. We had a lot of opportunities tonight. We didn’t make the plays,” coach Mike McCarthy said.

The hard turf at chilly Lambeau didn’t help either, with some players having trouble with footing early in the game. Unable to connect on medium-to-long range passes, the Packers’ best plays came when Hundley broke free for big gains on the run .

Not enough against the Vikings’ stingy defense.