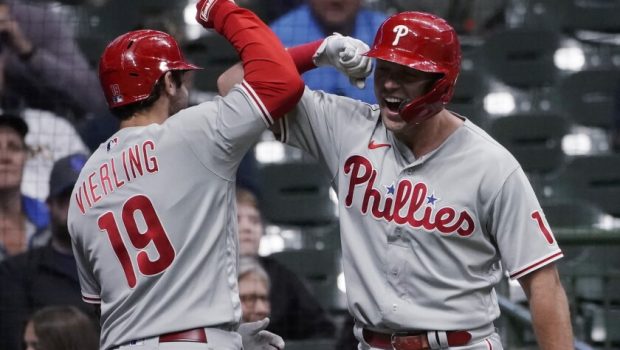 VIERLING STARTED YESTERDAY IN OMAHA, ENDED AS A PHILS HERO!

Matt Vierling opened the season with the Phils and woke up yesterday in Omaha, Nebraska.

He was shipped to the minors a month ago after hitting .170. He was recalled from Triple A along with Scott Kingery earlier in the day when the Phils placed Zack Wheeler on paternity leave and Johan Camargo on the injured list.

Vierling and Kingery flew to Chicago, rented a car and got to the ballpark in Milwaukee at about 2 p.m. Eight hours later, Vierling found himself coming off the bench to face one of the game’s nastiest relievers.

He clubbed a 1-2 slider over the wall in left-center to give the Phils the lead.

HOW. ABOUT. THIS. #RingTheBell pic.twitter.com/N3PbHzUTgS