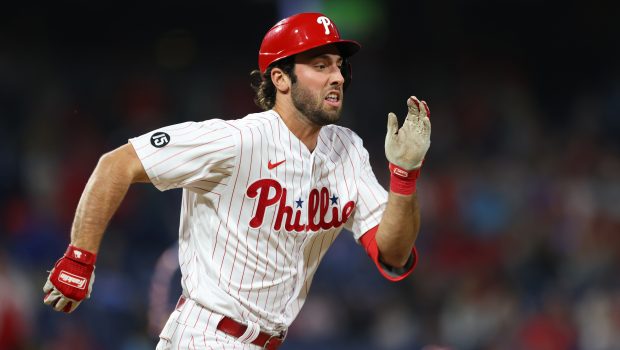 VIERLING LOOKS LIKE MONIAK’S REPLACEMENT IN CENTER FOR PHILS!

Phillies outfielder Mickey Moniak suffered a fracture in his right hand, and he’ll miss four-to-six weeks, and Bob Nightengale of USA Today indicates it’ll be nearer to the end of that timetable.

Moniak was hit by a pitch in his final exhibition game. While initial x-rays suggested he’d suffered only a bone bruise, further testing revealed the more unfortunate diagnosis. Moniak is certain to wind up on the injured list, a disappointing development after the club announced this morning that he’d made the Opening Day roster.

Losing Moniak only further thins a center field group that already looks like the weak point on the Philadelphia roster. Presumptive starter Odúbel Herrera is on the IL as well after straining an oblique in Spring Training. Matt Vierling looks like the favorite for center field run in the early going, with prospect Simon Muzziotti a candidate for his first MLB call.

Vierling had a nice showing during his first big league run last September, but his .248/.331/.359 line with the IronPigs is far from overwhelming. Baseball America raked Muzziotti tenth in the Phillies farm system this offseason, praising his plus center field defense and athleticism but raising some concerns about his offensive impact. The 23-year-old only has twelve career games above A-ball.

Additionally, the Phils placed catcher Rafael Marchan on the 60-day injured list with a left hamstring strain, according to the club’s transactions tracker at MLB.com. The move clears a 40-man roster spot for top prospect Bryson Stott, who has been promoted to make his major league debut, as previously reported.

The left-handed hitting Moniak has made 55 plate appearances in 29 big league games. He’s not coming off a great season, as he hit just .238/.299/.447 in 99 contests with Triple-A Lehigh Valley. Moniak has never developed into the kind of impact hitter the Phils were hoping when they selected him with the first overall pick in the 2016 draft. He has some speed and can play all three outfield positions, though, making him a possible fourth or fifth outfield option for skipper Joe Girardi.