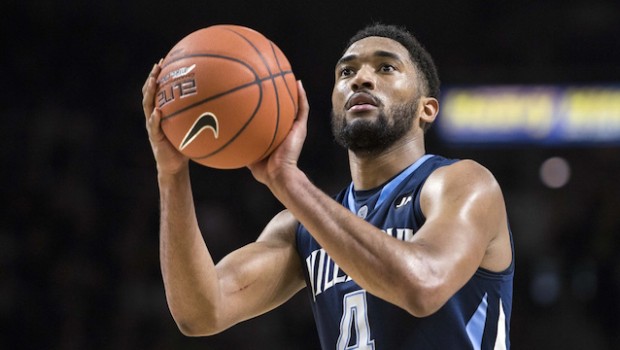 VICTORY OVER BUTLER ELEVATES VILLANOVA TO NO. 4 IN HIS EYES

Mark Titus of the Grantland.com has been impressed by Villanova all season, but never more so than after the Wildcats come from behind victory at Butler last Saturday.

And now he has elevated the Cats to:

I’ve been going to Butler basketball games for more than 15 years. I remember my dad and me paying five bucks apiece to sit wherever we wanted in Hinkle Fieldhouse to watch Butler play the Loyola-Chicagos and Valparaisos of the world. Sometimes, like in 2003, when Butler had one of my favorite college basketball teams ever, we went to games because the Bulldogs were good. Other times we went because Hinkle had the best hot dogs in the world and the concession stands gave away the cooked dogs that went unsold at the end of games. Whatever the case, I went to Butler games throughout my childhood. I sat at the end of the visiting team’s bench for a game in Hinkle when I was in college. And I’ve been to a Butler game since I graduated.

There’s a pattern, familiar to Butler fans, for what happens when great teams come to Hinkle. At first, Butler falls behind because it’s physically outmatched. But the visitors never manage to pull away. The crowd is too loud to let them. The gym is too quirky to get comfortable. Sometimes the sun peeks through the side windows and illuminates random patches of the court, which is a huge distraction if you aren’t used to it. The visiting team starts dribbling into dead spots on the floor and losing the ball. Butler hangs around with physical, packed-in defense and an offense that consists of 3s, 3s, garbage runners that hit the rim 30 times before falling, and more 3s. But the Bulldogs never get over the hump and build a lead. That’s because they save it for the end, when every factor gets turned up to 11, Hinkle magic spreads over everything, and Butler pulls out a miracle win that Butler fans act like they never saw coming, even though it happens every time.

Here’s the point: Villanova wasn’t supposed to beat Butler on Saturday. Hinkle was twice as loud as I’ve ever heard it. Butler was desperate for a win and a share of first place in the Big East. And every second of that game followed the script. When Darrun Hilliard (photo above) hit his game-winning 3,3 part of me wondered if it was the right strategic move: Well, the good news is that the 3 just gave you a three-point lead with 1.2 seconds to play. The bad news is that you left Butler plenty of time to draw up a play in which the Bulldogs get fouled as they hit a 3, miss the free throw on purpose, and then tap the rebound to a shooter who hits another 3 as he gets fouled at the buzzer. He sinks the free throw and you lose by four. Thanks for visiting Hinkle Fieldhouse. Here are some free hot dogs for the ride home.

And that’s almost what happened! Butler got a great look to send it to overtime (because of course), but it fell short. And yet, even if that game had gone to overtime and everything I’ve learned from years of Hinkle games told me Butler would win, I get the feeling Hilliard would never have let it happen. He was in hero mode and then some on Saturday. Butler students will probably be dressing as Hilliard next Halloween, since he’s the scariest thing to set foot on Butler’s campus since Matt Howard grew out his mustache. Every time Hilliard got an open look in the second half, there was a collective shriek of terror from the Butler crowd. After he drained his seventh 3 of the game, a Butler fan sitting behind me pleaded for mercy: “We get it — you’re a good shooter! Please stop now!”

Last week, I wrote that Villanova is a serious national title contender, even if most of the country hasn’t realized it yet. With the Wildcats’ recent wins at Butler and at Providence — two NCAA tournament locks — now seems like a good time for America to come around.

Villanova is playing as well as anyone in the country right now, and even though you probably aren’t hearing them mentioned as a potential 1-seed, the Wildcats are closer to the top of the bracket than you think.