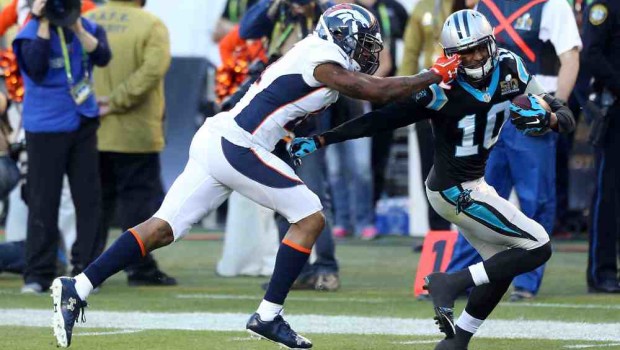 “We knew that if we got the lead, it was over. Our defense is too good. They weren’t going to be able to come back. We knew Cam couldn’t travel 80 yards on us,” cornerback Chris Harris said. “We dared him to throw. The game plan was, can you throw on us? Me, [cornerback Aqib] Talib (above) and [Bradley] Roby. We knew he couldn’t throw on us.”

The game was over, and the Denver Broncos had beaten the Carolina Panthers 24-10, and the Broncs started to talk.

The Broncos’ defense refrained from engaging in trash talk with the Panthers in the days leading up to Super Bowl 50. But before Broncos players were even out of their jerseys Sunday night following their 24-10 win against NFL MVP Cam Newton and the Panthers’ high-powered offense, they didn’t hold back.

“We don’t have to say nothing. We let them do all the talking. We let our pads talk. We talk with our helmets and our shoulder pads. They could do all the media talking, you know what I’m talking about? We’re not about that flashy stuff. We’re about that grind, putting in that work. Grind it. Work. That’s how you get the ‘ship,” safety T.J. Ward said. “They want to be famous. We want to be champions. They want to be rappers and backup dancers. We want to play football.”

It was exactly the type of brash attitude that the Broncos defense showed all year, sometimes very publicly, like they did in the lead-up to the AFC Championship Game against the New England Patriots.

But against the Panthers, the Broncos chose to be deferential. Perhaps it was because so many of the Broncos defensive players truly did respect Newton’s game, and they knew Newton presented an unfamiliar challenge.

That didn’t mean they weren’t confident, it just meant they wanted to save their boasting until after the confetti had fallen.

Harris and Ward said they saw Newton’s demeanor change by late in the first quarter, after Broncos linebacker Von Miller sacked him and caused a fumble that was recovered for a Broncos touchdown.

Ward said Newton was pouting, and Harris said it was easy to read Newton’s body language that he was quickly growing discouraged.

“Did you guys see him dance today? He [saw] us dance,” Harris said, laughing.