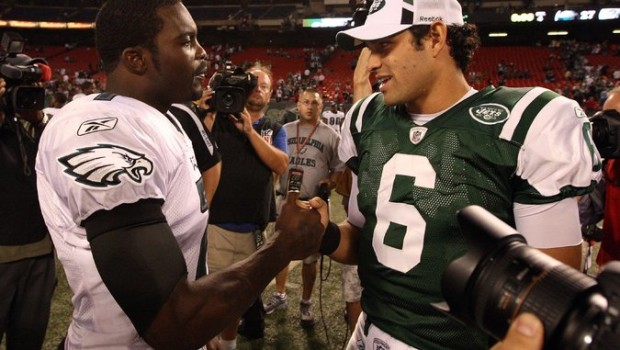 VICK ON PHILLY: ‘THERE WILL ALWAYS BE A SENSE OF GRATITUDE’

Mike Vick will be the Jets’ starting quarterback for the preseason finale against the Eagles on Thursday night, but Rex Ryan admitted that Matt Simms and rookie Tajh Boyd will get “99 percent” of the reps.

Vick (photo above with former Jet Mark Sanchez, now the Birds’ back-up QB) will be in just long enough for Philly fans to show their appreciation for a guy who resurrected his life and career in their city.

“There will always be the sense of gratitude,” Vick said Monday about getting a second chance from the Eagles after his incarceration for his role in a dog-fighting scandal. “That’ll never change.”

Vick admitted that he initially didn’t want to play in a situation that had him buried on the depth chart.

“Going to Philadelphia for the first time, taking the drive up there, I’ll never forget (it),” Vick said. “It was a place I didn’t want to be. I wanted to go to a team and start, but I knew I was going to sit behind Donovan (McNabb) and Kevin Kolb. I just remember being angry the whole trip and kind of upset almost (a) disgruntled employee before I could even get there.”

Vick capped his five years with the Eagles by not rocking the boat after losing his starting job due to injury last season.

“I think it helped me for this situation that I’m in now and what’s taking place here in this point in my life,” Vick said of being the backup quarterback.

“You always envision yourself being a starter. You always want to be the guy behind the center, but times change and things change and we change as individuals, our feelings and emotions. I think I’ve changed over the years. I still have the same attitude — winning attitude — but now I kind of see things from a different perspective.”