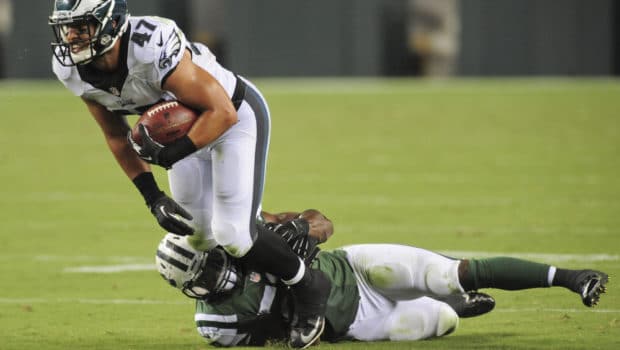 There is a strong possibility the Eagles will carry four tight ends, and Trey Burton will surely be one of them.

Burton was a frequent target for Sam Bradford, Carson Wentz and Chase Daniel during minicamp practices.

Doug Pederson will incorporate Burton into their red zone schemes to take advantage of the mismatch problems he presents opposing defenses.

Burton is very athletic and is versatile enough to make plays at the tight end, wide receiver and fullback positions.

Burton told Turron Davenport of USA Today’s the Eagles Wire, “I like the defense not knowing where I will line up. I am having a lot of fun out there. My job is to play as hard as I can, and whatever the coaches see me as, they will put me in the position that they feel I am best at.”

Burton entered the University of Florida as a dual-threat quarterback. He later made the transition to wide receiver, fullback, then tight end. Burton’s experience playing multiple positions throughout his football career has greatly benefited him, and he will have opportunities to create mismatches across the formation in his third season in the NFL.