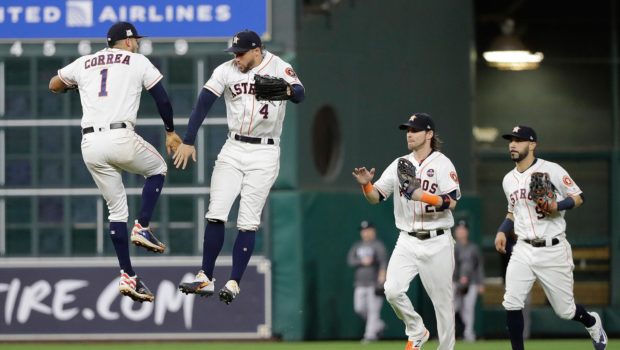 VERLANDER TO THE RESCUE! STROS-YANKS IN GAME 7 TONIGHT!

Justin Verlander saved the Astros’ season and forced a Game 7 against the Yankees in the American League Championship Series.

He threw seven scoreless innings for the Astros, who got clutch hits from Brian McCann and Jose Altuve in the fifth and a spectacular catch at the wall in the seventh by George Springer to beat the Yankees, 7-1, on Friday night in Game 6 at Minute Maid Park.

“For us to get to Game 7, I’m glad we played well enough to have home-field advantage,” Astros manager A.J. Hinch said. “It’s going to be here in Houston.”

The Astros, looking to advance to their second World Series, will meet the Yankees, who are aiming for their 41st AL pennant, on tonight in a win-or-go-home game. Since the LCS expanded to seven games in 1985, home teams are 18-7 in Game 7s. The home team has won the first six games of this ALCS.

It will be only the second Game 7 in Astros history, joining a 5-2 loss to St. Louis in the 2004 National League Championship Series.

“I’m not going to lie to you, it’s a lot of emotion in that clubhouse,” Altuve said. “It was a crazy game. But personally, I really like the way we play in these kind of games, with everybody up. I believe in my team. [Saturday] is going to be a good night.”

Verlander, who threw a 124-pitch complete game to beat the Yanks in Game 2 last Saturday, held New York to five hits and struck out eight. He’s 9-0 (8-0 as a starter) since Houston acquired him in an Aug. 31 trade with Detroit, and has thrown 24 consecutive scoreless innings in elimination games.