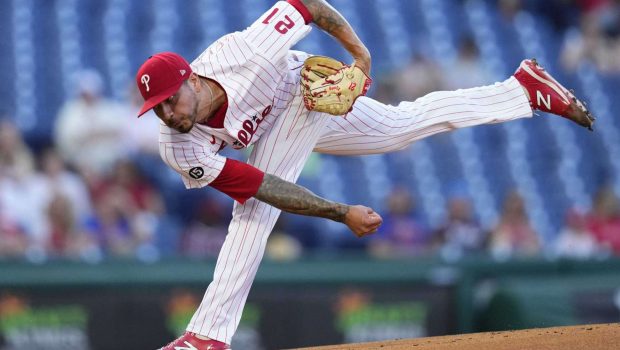 So, this is what it takes for the Phillies to win a game with the worst bullpen in baseball:

A lights-out pitching performance and a home run from a guy who can’t field.

Vince Velasquez tossed a two-hitter over seven innings, Rhys Hoskins hit a solo homer and the Phillies held on for a 4-3 victory.

Velasquez (3-2) allowed singles to Jazz Chisholm Jr. and Jon Berti, struck out seven and retired the last 13 batters he faced.

“That’s the best performance Vinny gave us all year and we really needed it,” Phillies manager Joe Girardi said.

A bullpen that has blown 21 save chances this season barely closed it out.

Connor Brogdon and José Alvarado walked the bases loaded in the eighth and a run scored on Alvarado’s wild pitch. Adam Duvall hit a two-run homer off Alvarado in the ninth before the hard-throwing lefty settled down and got the final three outs.

“The free baserunners hurt us more than base hits and that’s what has to be taken care of,” Girardi said.

His control issues in the first inning led to Philadelphia’s first run. Rogers hit Jean Segura with a pitch and walked Bryce Harper. Andrew McCutchen’s broken-bat RBI single was the only hit Rogers surrendered until Hoskins blasted his 17th homer to left-center in the sixth.

Pinch-hitter Odúbel Herrera drove an RBI double to right-center off Anthony Bender in the seventh and scored on a wild pitch, extending Philadelphia’s lead to 4-0.

Bender’s streak of no earned runs allowed to begin his major league career ended at 22 innings.

“I thought he was good coming into the game and just lost it there with his command as the pitch count went on there,” Marlins manager Don Mattingly said of Bender.

The rookie right-hander’s streak was the fifth-best to start a career in major league history.

Velasquez got help defensively in the third from Harper, who made a leaping catch a couple steps in front of the right-field fence to rob Starling Marte of a game-tying extra-base hit.

Velasquez, who began the season in the bullpen, lowered his ERA to 4.22 with his start allowing two runs or less in five or more innings.