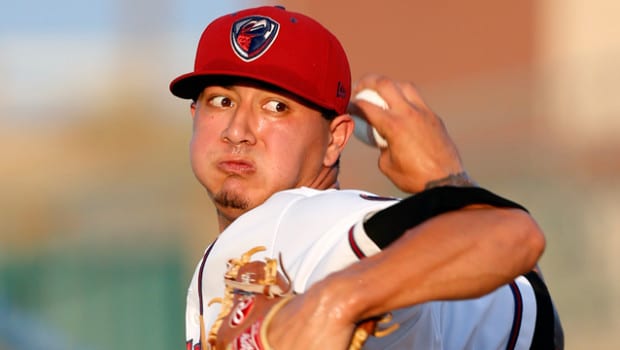 VELASQUEZ THE STAR OF PROSPECTS PHILLIES GOT FOR GILES

December 9, 2015 will be remembered as the day the Phillies’ rebuild became deadly serious.

On Wednesday night the Phils traded closer Ken Giles and got a trio of young players from the Houston Astros: right-hander Vincent Velasquez (above), outfield prospect Derek Fisher and lefty Brett Oberholtzer, with a player to be named later to come.

Velasquez technically is no longer considered a prospect because of service time in late August. But he’s a young, 23-year-old right-hander still very much in career-establishing mode. At the time of his removal from top-prospect lists, the 2010 second-round pick had been re-ranked at No. 69 on MLBPipeline.com’s Top 100 list, and sat at No. 4 on theAstros’ Top 30. If he were still eligible, he’d slot in at No. 5 on the Phillies ever-improvingTop 30 list.

Velasquez has the chance to have three major league average or better pitches and commands them all well when he’s at his best. His fastball will sit in the low-to-mid 90s with life and his changeup is his second above-average offering. His curve isn’t quite as good but should be a quality breaking ball when all is said and done. He has good mound presence — when he’s on the mound. The one thing Velasquez has struggled with has been staying healthy, with both Tommy John surgery and a groin issue on his medical resume. The Astros had moved him to the bullpen after he threw fairly well in the rotation to monitor his innings and get him through a season in one piece. If he can stay away from the disabled list, he could be a future No. 3-type starter.

Fisher, ranked No. 8 on the Astros’ list at the time of the trade, fits in at the same spot on the Phillies’ Top 30. Had Fisher not broken a hamate bone in his junior season at Virginia and performed well, he could’ve been one of the top college bats taken in the 2014 Draft. Instead, he went No. 37 overall to the Astros in the Competitive Balance Round A, then spent his first full season split between the Class A Midwest League and Class A Advanced California League.

While some of Fisher’s numbers don’t jump off the page — an .825 OPS in the hitting haven of Lancaster, for example — there are tools to like here. Fisher has both power and speed, finishing as just one of six Minor Leaguers in 2015 with 20 or more home runs and stolen bases (and the only one who topped 30 steals in that half dozen). There is some swing and miss in his game, but he does also draw a fair amount of walks. Defensively, Fisher has seen time in both center and left, but while his speed helps in center, his below-average arm should keep him in left field long-term. A stint in the Arizona Fall League should have him ready for Double-A in 2016.

Oberholtzer is a 26-year-old finesse lefty who is a year removed from making 24 big league starts. He had some blister problems in 2015, making eight starts for Houston, and has yet to find consistency in the Majors. He has the ceiling of a No. 5 starter.