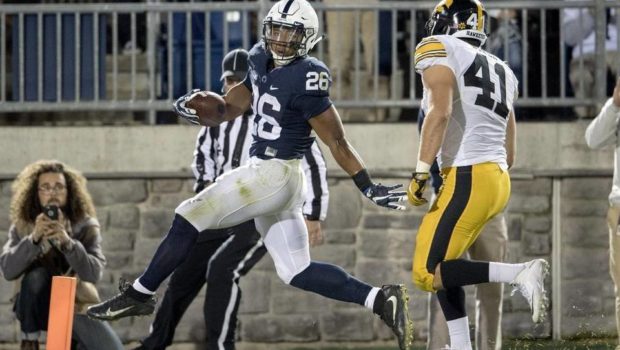 The Big 10 just wrapped up its media circus in Chicago, just in time for Vegas to set odds on who will win the conference:

The Nittany Lions might have been the best team in the country from October on last season, but a Week 2 loss at Pitt, and a 39 point defeat at Michigan killed their national title chances. This season PSU faces a monster stretch in October and November, playing at Northwestern, and then after a week off taking on Michigan, Ohio State, and Michigan State, the last two on the road, during a three week span.

They do not face Wisconsin in the regular season.

Sixteen starters return with Quarterback Trace McSorley and running back Saquon Barkley (above) among the best one-two punches in the country. On defense, the Lions linebacker are strong, but they must get pressure up front. They are 0-7 over the last two years when going an entire game without a sack.