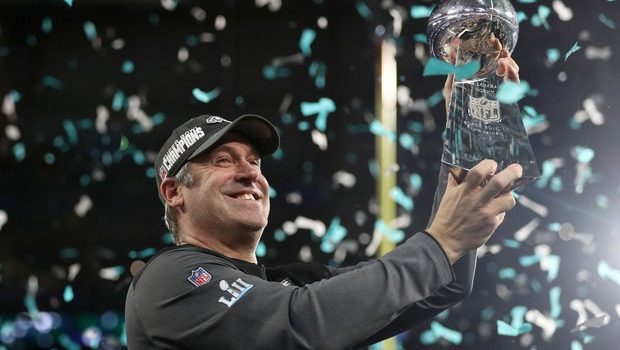 The New England Patriots’ season win total opened at 11 yesterday at the Westgate SuperBook, the highest in the league, but down more than a win from last season’s number.

The defending Super Bowl champion Eagles — who beat the Pats on Feb. 4! — and Pittsburgh Steelers each opened at 10.5, followed by the Green Bay Packers and Minnesota Vikings at 10. No other team opened with a double-digit win total.

Last spring, New England was coming off a Super Bowl title and opened with the highest win total (12.5) since at least the 2001 season, according to odds archive Sportsoddshistory.com. No other team was set higher than 10.5.

This year, the gap between New England the rest of the league has narrowed significantly.

“[Tom] Brady is going to be 41, and [Jimmy] Garoppolo is gone,” said Ed Salmons, the Westgate’s head football oddsmaker. “There just isn’t as much margin of error for the Patriots at this point.”

The Westgate posted win totals on every team Sunday. Bettors can take over or under on the set number at varying odds.