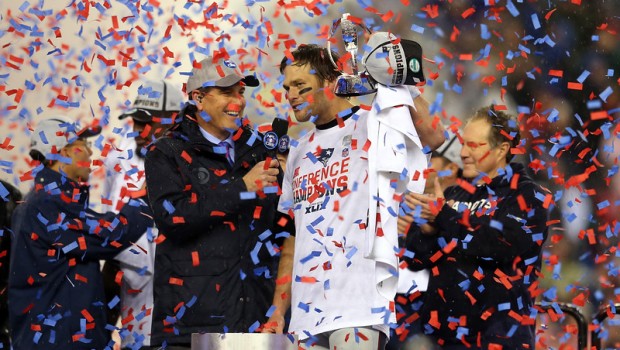 A VALIDATION OF THE PATRIOT WAY, SAYS THE BOSTON GLOBE

There. New England football fans have the ultimate validation of the Patriot Way.

The Patriots once again established that they win because they are smarter, more clutch, and better than everybody else. Nothing less. Super Bowl XLIX was an homage to the Hoodie. For the first time in 10 years, the Patriots are champions of the football world, and no one can take that from them.

In a wild game that had everything, the Patriots rallied from a 10-point deficit (it would have deflated most teams) with less than eight minutes remaining and defeated the Seattle Seahawks, 28-24, Sunday night at University of Phoenix Stadium.

“I’m so proud of these players,’’ said coach Bill Belichick. “I love these guys.’’

Best Super Bowl of them all? Maybe. Certainly the craziest. Playing what he termed “the biggest game of my life,’’ Tom Brady (37 of 50, 328 yards) threw four touchdown passes, copped the MVP trophy, and moved into the four-Super Bowl plateau occupied by Joe Montana and Terry Bradshaw.

The final 66 seconds are easily the wildest minute-plus in Super Bowl lore. It looked very much like Groundhog Day when Seattle’s Jermaine Kearse made a circus catch on a tipped pass that took the Seahawks to the 5-yard line with 1:14 left. It was shades of David Tyree on the same field against the Patriots seven years earlier.

How Seattle lost it from there will be debated for decades. After Marshawn Lynch ran the ball to the 1-yard line, Seattle had second and goal with 26 seconds left and a timeout in hand. Incredibly, Pete Carroll called for a slant pass from the 1. In traffic. And that’s when Patriots rookie cornerback Malcolm Butler stepped in front of Ricardo Lockette and intercepted Russell Wilson’s pass.

It was a tremendous play by Butler, but it was also nothing less than the strangest play call in the history of sports. Seriously. The Seahawks have the best downhill runner in the game in Lynch. All they had to do was give him the ball one, two, three more times and the game would have been over and Seattle would have had back-to-back championships.

After the game, Carroll tried to explain.

“It’s not the right matchup for us to run the football,’’ said Carroll. “So on second down we throw the ball really to kind of waste that play . . . no second thoughts or no hesitation in that at all. And unfortunately, with the play that we tried to execute, the guy makes a great play and jumps in front of the route and makes an incredible play. And unfortunately, that changes the whole outcome.’’

There was a distinct air of desperation around the Patriots coming into the game. They endured a fortnight of mockery and suspicion after it was learned they used footballs that failed to meet PSI requirements in their AFC Championship rout of the Colts. The league launched a still- pending investigation, and Belichick and team owner Robert Kraft both felt a need to defend the franchise and challenge the NFL to produce evidence that the Patriots had tampered with the footballs.

Deflategate damaged the hard-earned franchise brand, but it also galvanized the Patriots and their fans. It was the Flying Elvises vs. the Shield all week long in Arizona.

Brady and Belichick carried the weight into the ultimate game.

The Patriots wore white jerseys, just as they did in Jacksonville in 2005, the last time they won a Super Bowl. The Patriots were first out of their locker room just after 4:10 p.m., but when the Seahawks emerged a minute later it became clear that this was not going to be a home game for New England. Seattle travels like no other NFL team. Folks from the Pacific Northwest took over Manhattan last year and it was the same deal Sunday night.

The Patriots came out with their old Charlie Weis, dink-and-dunk offense, attempting to kill the Seahawks with a million paper cuts. It was all working nicely as Brady completed nine of his first 10 passes, none of them for more than 11 yards.

Then the Legion of Boom struck. As the Patriots were methodically marching toward what looked like a certain score, Brady was intercepted on his first pass over the middle, with less than two minutes remaining in the first quarter. On third and 6 from the 10, Brady threw a ball off his back foot as he was crunched by a pair of Seahawks. Jeremy Lane intercepted the ball near the goal line and ran it out to the 14. It goes down as one of the worst throws of Brady’s career.

The Seahawks took a 17-14 lead on a 27-yard field goal by Needham’s own Steven Hauschka in the fourth minute of the second half. On the ensuing series, Brady was intercepted for a second time when linebacker Bobby Wagner stepped in front of Rob Gronkowski.

The Seahawks pounced, with Beast Mode carrying the load, and then Wilson — taking advantage of Darrelle Revis running into an official — floated a 3-yard TD pass to Doug Baldwin to make it 24-14 with 4:54 left in the third.

With the team still trailing by 10 with less than eight minutes to play, Brady went into surgical Montana mode and twice drove the Patriots for touchdowns. The first TD drive was capped by a Brady-to-Danny Amendola 4-yard pass. After a Patriots stop, New England got the ball back and Brady drove the Patriots 64 yards in 10 plays, finishing the winning drive with his fourth TD pass of the night, a 3-yard strike to Julian Edelman. Brady was 8 for 8 on the winning drive.

Seattle did not quit. A 31-yard Wilson-to-Lynch pass put the Seahawks into Patriots territory. Then came Kearse’s amazing catch.

Finally, there was the Grady Little-like gift from Pete: the ridiculous slant pass. It was the only interception of a 1-yard pass in the NFL all season.

“I’m so proud of Brady and Belichick for handling everything they did,’’ said Kraft. “I love them and Patriot fans should feel really good. I love our team. I’m proud of our guys. We’re going to carry on and hopefully continue to play well.’’

They Did Their Job. They are champs again. And the record will show that 15 years after he was fired by Kraft, Carroll finally delivered a Lombardi trophy to New England.