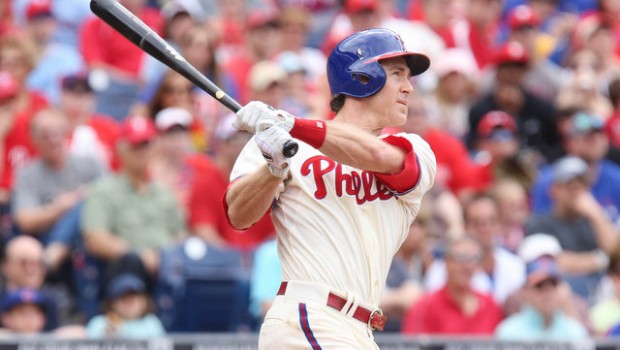 If you are planning to go to the Bank to see this afternoon’s Phils’ series finale with the Dodgers in anticipation of seeing the great Zack Greinke hurl for L. A., don’t be surprised if you also see Chase Utley.

Utley, who has been on the DL since June 23 with a sprained right ankle, went 3-for-4 with one double, one RBI and one walk in the third game of his rehab assignment Wednesday night with Double-A Reading.

But what happens to Utley upon his return with second baseman Cesar Hernandez playing so well?

“I’m going to try and mix Chase in at second base,” Phillies interim manager Pete Mackanin said this week.

Hernandez will give Freddy Galvis a break at shortstop and Maikel Franco a break at third base to keep him in the lineup. Utley also will play occasionally at first base.

“I already had a conversation with Cesar to let him know that he is not a utility player, but it’s important to get Chase at-bats,” Mackanin said. “[Utley] may play some first base, so hopefully three or four days a week I can get him in. We’ll see.”

It is important for Utley to play because he is receiving interest from a few teams, most notably the Angels and Cubs. While Utley has hit just .179 with seven doubles, one triple, four home runs and 25 RBIs in 65 games this season, there is a real chance the Phillies could find a trade partner before the Aug. 31 waiver Trade Deadline.

Utley has 10-and-5 rights and has indicated numerous times in the past he does not wish to waive those rights. But he hinted in Spring Training he could change his mind if the team does not compete and his fellow veterans are traded.