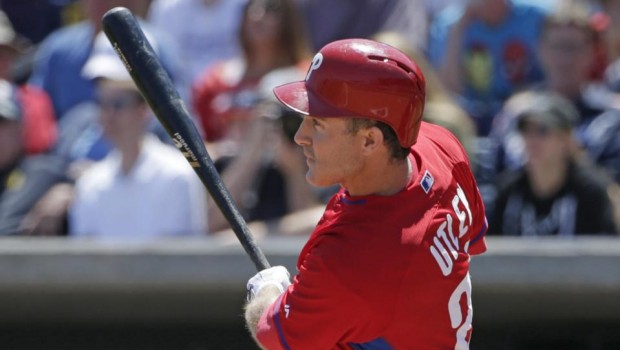 It didn’t take Chase Utley long to get his stroke back.

The Phillies’ second baseman, who missed the start of spring training with an ankle injury, hit two home runs and drove in three runs for the Phillies in a 4-4 tie against the Detroit Tigers on Sunday.

The 36-year-old missed the first 10 games of the exhibition season after spraining his right ankle in January. He hit a two-run homer in the first off Anibal Sanchez and connected again on the first pitch of the fourth.

”I think he was (waiting) for the curveball,” Sanchez said. ”I threw him two curveballs and he hit them pretty good. He’s a pretty good hitter. … He was ready for it.”

”Chase swung the bat very well,” Phils manager Ryne Sandberg said. ”He went down yesterday and took advantage of some at-bats on the minor league side and actually hit a home run down there and carried that over to today. … It hasn’t taken him too long but he looks like he’s pretty sharp.'”

Sanchez struck out 10 and walked one in six innings, allowing all four runs and five hits. Philadelphia’s Aaron Harang gave up four runs – three earned – and five hits in 5 1-3 innings with five strikeouts and two walks.