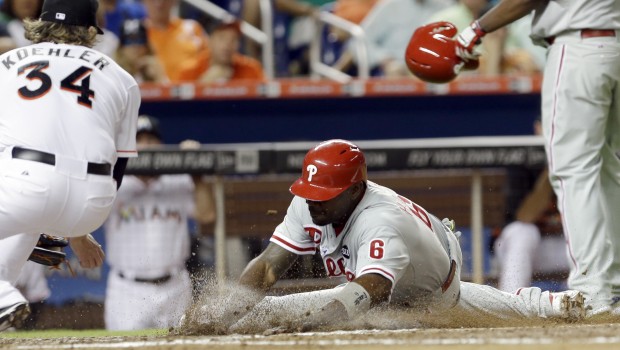 UTLEY SLAMS 3RD HR, BUT PHILLIES LOSE TO MARLINS IN THE 9TH 4-3

Ryan Howard is out at home trying to score in the fourth inning.

A Phillies week that started so promisingly in St. Louis with Cole Hamels’ first win of the season is ending badly in Miami.

Giancarlo Stanton never broke stride and scored from first on Marcell Ozuna’s game-winning hit in the ninth inning, and the Miami Marlins stayed hot by downing the Phillies 4-3 on Friday night – improving to 8-1 since the dreadful 3-11 start.

Stanton led off the ninth with a full-count walk off Ken Giles (1-1), and Ozuna followed with the hit that capped his first 4-for-4 game.

Steve Cishek (1-1) gave up a two-out triple in the ninth to Cody Asche, but escaped by getting Carlos Ruiz to ground out and keep the game tied.

Two batters later, it was over.

”We couldn’t get that big hit until the end,” Redmond said.

Chase Utley hit a three-run homer for the Phillies, who have lost four straight.

”Walks have come back to haunt us, that’s been the story the last four or five games,” Phillies manager Ryne Sandberg said. ”Can’t end up walking anybody, they end up scoring each time and again tonight. Two of the walks were runs. We’ve been having problems with that.”

It was milestone night for the Phils. Ryan Howard played at first base for the 1,299th game, breaking the team mark held by Fred Luderus. And Utley appeared in his 1,500th game, one shy of tying Granny Hamner for No. 10 on the Phillies’ all-time list.

Howard made a big play at first on his big night, diving left to snare a throw from Utley while keeping his right foot on the bag to complete a 5-4-3 double play after Miami loaded the bases – but came up scoreless – in the sixth.

Miami starter Tom Koehler faced the minimum nine batters through three innings, then faced all nine again in the fourth – and was fortunate he didn’t see more. Utley’s third home run of the season gave Philadelphia a 3-1 lead and the Phillies had the bases loaded later in the inning.

But Koehler fanned Freddy Galvis on a breaking ball that catcher J.T. Realmuto blocked in the dirt. And after Koehler’s first pitch to Phillies’ starter Jerome Williams skipped off Realmuto’s glove to the wall, Realmuto got it back to Koehler in time to tag Howard – trying to score from third – and end the inning.

The Phillies didn’t like the call, but it was upheld after review.

”I pulled my hand back and he just went straight down,” Howard said. ”I didn’t feel anything.”

Koehler and Williams both allowed three runs in five innings.