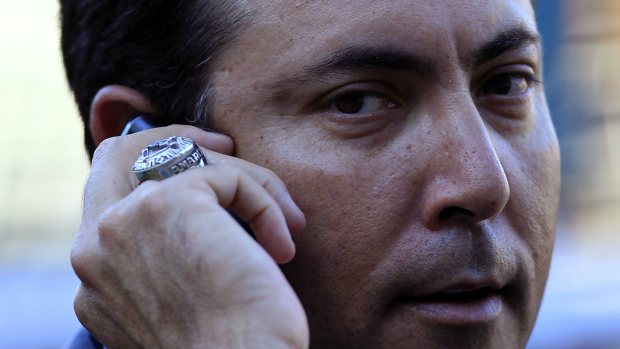 AS USUAL, WIMPY AMARO RESPONDS TO PAPELBON WITH MORE MUSH

Yesterday morning on the appropriately nicknamed Morning Zoo, feckless Phillies general manager responded to Jonathan Papelbon’s criticism of the team and especially the front office by:

“I understand his issue,” Amaro said. “The man wants to go and play for a contender. That’s why he signed with us. That is what we sold him when we were having the discussion to bring him here to Philadelphia. And sadly, we haven’t lived up to our part of the bargain. And I could understand why he would want to go play for a contender.”

While Amaro said there are “live discussions” going on with other teams regarding Papelbon, he reiterated that the Phillies are under no obligation to trade their controversial closer.

“There’s nothing in anyone’s contract that if you request to be traded, you have to be traded,” Amaro said. “Pap is a very good pitcher. He doesn’t know anything about the front office. It’s as simple as that.”

“I’m not worried about Cole Hamels and his value,” Amaro said. “People know what he is. As far as Aaron Harang is concerned, he had a foot problem. He’s dealing with an injury. You can’t really trade a guy who’s got an injury. Frankly, there was no real market for him prior to him getting injured.”

Amaro also said he had no regrets about declaring Cesar Hernandez the Phillies’ starting second baseman over injured veteran Chase Utley. Amaro added that Utley is not considering retirement despite being mired in the worst season of his career.

“No, he’s absolutely unequivocally not ready to do that,” Amaro said. “He’s got plenty in the tank left. I think that he believes that getting over some of those ankle issues that have been nagging at him for quite some time, I think he feels that’ll get him turned around and hopeful that it does for a variety of reasons. For him, for us, for everybody.”