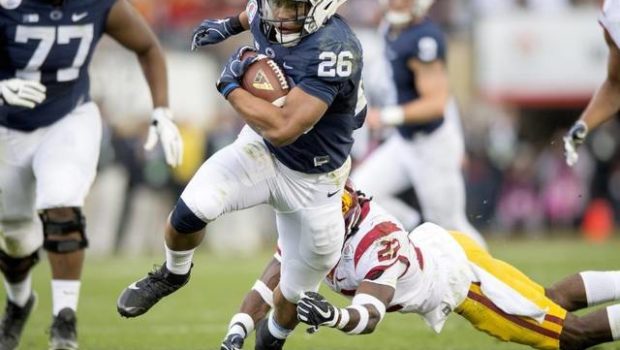 Saquon Barkley rushed for 194 yards and two TDs as the Nittany Lions (12-2) followed up their 21-point comeback in the Big Ten title game with another ferocious rally, only to watch the Trojans rally back.

After 98 points and 1,040 yards of spectacular offensive play, the highest-scoring Rose Bowl in history rested on the left foot of a Southern California kicker who had already missed two field goals.

Matt Boermeester somehow blocked out the tension, and he focused only on securing a perfect ending to an epic evening.

“Game was on the line, but you’ve got to keep true to your technique and trust it,” Boermeester said.

His technique was sound. His kick was true. And the Trojans got their storybook finish in Pasadena.

Boermeester hit a 46-yard field goal as time expired , and No. 9 USC rallied from a 14-point deficit in the fourth quarter for a 52-49 victory over No. 5 Penn State last night in the 103rd edition of the Granddaddy of Them All.

Freshman Sam Darnold passed for 453 yards and five touchdowns while leading a stirring comeback by the Trojans (10-3), who won their ninth consecutive game and triumphed in their first Rose Bowl since 2009. USC trailed 49-35 with nine minutes to play, but persevered to win one of the greatest Rose Bowls ever played.

“It was just two really good football teams playing at the highest level and competing until the absolute, very end,” USC coach Clay Helton said. “The greatest players shined brightest on the biggest stage. It’s what fairy tales are made of.”

Deontay Burnett, who had three TD receptions, caught a tying 27-yard scoring pass from Darnold with 1:20 left to cap an 80-yard drive in 38 seconds with no timeouts available.

Leon McQuay III then intercepted an ill-advised long pass by Trace McSorley and returned it 32 yards to the Penn State 33 with 27 seconds left. In an instant, the Trojans went from preparing for overtime to having a chance to win.

“I didn’t know whether to block or celebrate” after McQuay’s interception, USC defensive lineman Stevie Tu’ikolovatu said. “I kind of did both.”

The Trojans set up Boermeester, and the junior confidently drilled the Rose Bowl winner , sprinting away as it went through the south uprights and set off pandemonium on the hallowed field.

McSorley passed for 254 yards and threw two of his four touchdown passes to Chris Godwin for the Nittany Lions (11-3), whose nine-game winning streak ended in heartbreaking fashion.

“That game doesn’t really define us,” Penn State coach James Franklin said. “I wouldn’t be any more proud tonight sitting here with a win … after what might have been the most exciting Rose Bowl game ever.”

With one jaw-dropping play after another from two talent-laden offenses, the teams obliterated the combined Rose Bowl scoring record in the third quarter, surpassing Oregon’s 45-38 victory over Wisconsin in the 2012 game.

The Nittany Lions’ offensive stars put together a highlight reel during a 28-point third quarter. After trailing 27-21 at the break, Penn State scored three touchdowns on its first three snaps of the second half: a stunning 72-yard run by Barkley, a bobbled 79-yard catch by Godwin and a 3-yard TD run by McSorley after an interception return.

McSorley went 18 for 29, throwing interceptions on his first pass and his last pass. He was left lamenting that final throw in an aggressive attempt to win. “I tried too much to force it to Chris (Godwin),” McSorley said. “He had been making plays for us all game long, so that was the guy in my mind. … To come back, to climb back like we did and not finish, it hurts.” 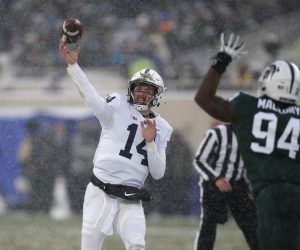