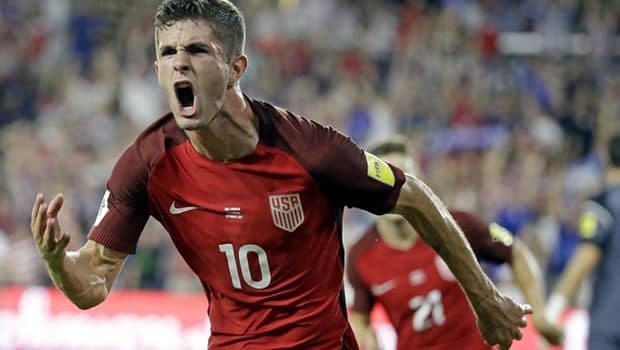 Christian Pulisic, the 19-year-old from Hershey, Pa., who’s currently the 357th anointed savior of American men’s soccer, played pretty well. The rest of the team? Well, I’d say it was like watching a group of vacationing dentists try organized sport for the first time, but there are reasons to fear dentists. Dentists know how to hurt people.

By Brian Phillips, from the New York Times

For around 30 years, from the 1986 World Cup through the night of Tuesday, Oct. 10, the United States men’s national soccer team managed to project at least a pleasing illusion of progress. Maybe it wasn’t always real progress. Maybe it wasn’t the kind of spectacular success enjoyed by the United States women’s team, which has won three World Cups and four Olympic gold medals and galvanized generations of fans.

But there was always something you could point to, some piece of evidence to suggest that the men’s game was improving in this country. That the people at the top had a plan.

During those 30 years — again, before Tuesday night — we qualified for every World Cup. We hosted one ourselves. We reached knockout rounds. We developed a professional league.

We convinced David Beckham — and please, pause here to consider the majesty of this achievement — that he would like to spend time in Florida.

It felt as though we’d come a long way since 1986, the last year the United States men failed to qualify for a World Cup. Remember that feeling? It seemed like a bygone age, a lost world where Ronald Reagan was president and most Americans thought “soccer” was a sort of rhythmic gymnastics for countries that hadn’t heard of Bruce Springsteen.

Whatever fate threw at us, we knew, at least the game would never go back to those dark ages again.

It was bad. For American soccer fans, Tuesday was a fiasco, a result so frustrating, embarrassing and preventable that it called into question everything we thought we knew about the way the game in this country is run.

What happened Tuesday is that the United States men’s team was knocked out of World Cup qualifying thanks to an almost surreally meek performance against Trinidad and Tobago, previously the worst team in the Concacaf conference for teams from North and Central America and the Caribbean. Needing only a draw to clinch their ticket to Moscow, the Americans politely self-asphyxiated en route to a 2-1 loss.

Christian Pulisic, the 19-year-old who’s currently the 357th anointed savior of American men’s soccer, played pretty well. The rest of the team? Well, I’d say it was like watching a group of vacationing dentists try organized sport for the first time, but there are reasons to fear dentists. Dentists know how to hurt people.

The worst part didn’t come during the match itself, lukewarm drizzle though it was, but after the match, when the leaders of United States soccer delivered their verdicts to the press. How did they, having just overseen the worst debacle in the last generation of their sport, plan to change things to ensure nothing like this would happen again?

“Nothing has to change,” Bruce Arena, the coach of the men’s team,declared.

“You don’t make wholesale changes based on the ball being two inches wide or two inches in,” Sunil Gulati, the president of the United States Soccer Federation, insisted.

Really? Your goal — the goal of every national soccer federation — is to win the World Cup. Don’t you make wholesale changes based on not making it into the World Cup?

Gulati was referring to the fact that Clint Dempsey had a shot hit the woodwork in the final minutes of the game. If it had gone in, the team would have qualified. So why panic? I might be sympathetic to this argument if I thought being two inches from disqualification were a reasonable goal for the men’s team to aspire to. In fact, had the shot gone in, qualification would only have masked the team’s pitiful state a little longer.

What Arena and Gulati don’t seem to understand is that fans of the United States men’s team have spent years in a state of excruciatingly patient optimism. We’ve worked hard to convince ourselves that each small sign of progress — a Gold Cup win here, a last-second goal there — meant the team was in good hands. That hasn’t always been easy. It often feels as though the national team is permanently on the threshold of a success it never quite reaches, as if it’s built to thrive on medium-size stages but fizzle on large ones.

The kind of progress Gulati seems to value most is corporate, institutional, political. He cares about sponsorships, shoring up organizational foundations. He has done wonders for the United States federation’s standing within soccer’s international body, FIFA. He’s had less success improving quality of play, both at the top of the game and at the youth level, where American men’s teams have missed consecutive Olympics under his watch.

For me, and I think for many American fans, the immortal flub of this qualifying campaign has driven home the fragility of my faith in the team’s path. For a long time I was willing to tell myself that the professionals knew what they were doing. Now I think we’ve given too much trust to leaders who’ve done a better job selling their own competence than demonstrating it.

The World Cup, with its thousand ethical shortcomings forever balanced against its capacity to deliver joy, is already dispiriting in too many ways to justify investing more hope in this brand of pseudo-technocracy.

It’s time for a change. Arena resigned on Friday. Gulati is up for re-election in February. He needs to go as well. The next thing I want to see from United States soccer is a jackhammer, not a news conference. The Gulati regime at the federation has committed one of the most bizarre tactical errors in sports management. It has created a large, passionate audience and given it nothing to watch.

Brian Phillips is the author of the forthcoming “Impossible Owls: Essays.” Reprinted by permission.

USA WINS AND ADVANCES! PULISIC SCORES AND IS INJURED!