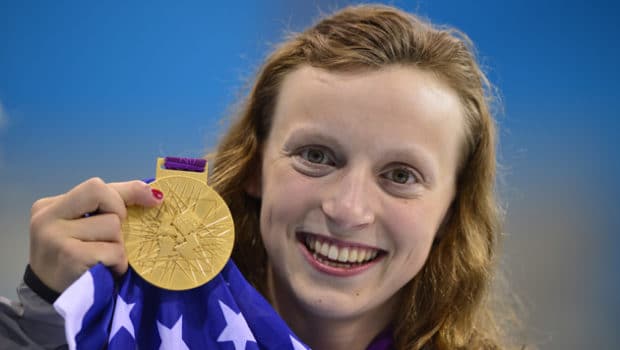 Katie Ledecky anchored the U.S. women’s 4×200 freestyle relay, leading the Americans cruise to victory ahead of Australia and Canada, who won silver and bronze respectively.

In the final leg of the relay, Ledecky came from behind to beat Australia as the U.S. won in 7:43.03. Tasmin Cook finished strong for Australia but the team was 1.84 seconds behind.

“I had no doubt in my mind as soon as I touched and saw that we were second and close,” said Maya DiRado, who swam the third leg of the relay. “I knew that Katie would crush it. I just had to get out of the pool, get back and run around. Then I kind of started to tear up, and I was like, ‘We are going to win a gold medal!’ ”

Ledecky’s medal haul is now up to three gold and one silver in four races so far. She’s still got the 800 free to go.

The Americans led off with Allison Schmitt, who also swam in yesterday’s preliminary heat. Schmitt was followed by Leah Smith, then DiRado, before Ledecky finished off the race.

“That was so much fun,” Ledecky said. “Being on the relay with those three girls — they’re three of my best friends in this sport. We just had so much fun with it.”

Missy Franklin, who had qualified second in the 200 free at U.S. trials six weeks ago, did not get to swim the final, adding to a disappointing week for the darling of the London Games. On Monday, Franklin failed to qualify for the 200 free individual final.

Franklin will get a gold medal for this relay — her first medal of the Rio Games — because she swam in prelims.