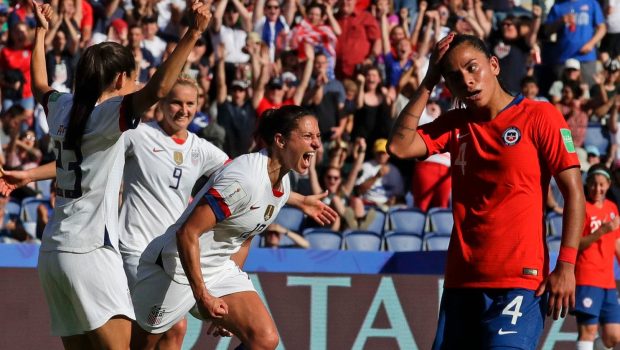 USA’S 3 GOALS PLENTY TO CRUISE INTO WORLD CUP ROUND OF 16!

The USA didn’t score 13 goals, as it did against Thailand, so the critics can’t complain about that.

They’ll likely find something else to carp about in yesterday’s 3-0 win over Chile that secured a spot in the Women’s World Cup’s round of 16.

Even with seven new starters, the top-ranked Americans scored three times in the first half and, with Carli Lloyd adding to her World Cup legend by striking twice, toyed with another opponent as they performed with the ferocity and expertise that has made them favorites for a fourth crown.

If not for Christiane Endler’s second-half masterwork in the Chilean net, the result would have climbed to embarrassing levels again in front of a pro-U.S. crowd of 45,594 at Parc des Princes.

The easy stuff is now out of the way: 16-0 on goals, 65-3 on shots and 25-1 on corner kicks against overmatched, developing programs.

“We are climbing up a mountain now,” Lloyd said, “and it’s only going to get harder.”

Sweden also remained perfect in Group F with a 5-1 victory over Thailand, setting up a showdown with Jill Ellis’s squad Thursday in Le Havre for first place.

With a superior goal differential — the first tiebreaker — the United States will require only a draw to claim the top spot and make plans for June 24 in Reims, the site of the 13-0 record romp over Thailand.

Winning the group, however, would probably put that team on a path to face impressive France in the quarterfinals.

Ellis, however, dismissed any suggestions of tapping the brakes.

“You can’t overthink this,” she said. “Deciding to come second or manipulating a score, that can be dangerous. You need your team to be in a really good place. Feeling good about your performance is the best confidence-maker out there.”

Right now, the Americans are feeling supremely confident. They put Sunday’s result to rest in the first half as Lloyd sandwiched goals around Julie Ertz’s header. Endler’s gems in the second half — plus U.S. shots off the posts and crossbar and Lloyd’s missed penalty kick — prevented the match from getting out of hand.

With the way things are rolling, Ellis does not want to introduce any counterintuitive elements into her dominant, fine-tuned machine.

“If we feel good, if we are playing the way we can play, we can win games,” she said. “I don’t think there is plotting out a dream path. The draw is what it is, and we navigate what is in front of us.”

Ellis carries so much confidence in the roster, she rested most of the starters from the opener and, in the second half, removed three players who had started both matches. In all, every player, except the two backup goalkeepers, has made an appearance — a remarkable situation after two matches.

“If you want to go far in the tournament,” Ellis said, “you’ve got to have legs.”

As for interrupting the momentum created by the opening-day starters, Ellis added, “I don’t have any concerns about losing any rhythm [and] having those players who didn’t play [Sunday] prepared and hungry and ready to go.”

The rotation is also keeping everyone engaged, she said. “It’s a happy camp.”

Sunday’s starters were happy to show their stuff, particularly Lloyd and left back Tierna Davidson, who, at 20, is the team’s youngest player. She assisted on the last two goals.

Lloyd, who will turn 37 next month, has said repeatedly that she does not like coming off the bench. With a dynamic three-player front line ahead of her on the depth chart, she has had to wait her turn.

On Sunday, Alex Morgan (five goals against Thailand), Megan Rapinoe and Tobin Heath were not needed.

“Nothing has changed. My preparation is the same,” said Lloyd, who set a record by scoring in a sixth consecutive World Cup match, dating from her 2015 heroics in Canada. “Mentally I am stronger than ever. I know what I need to do. I know my ability is there. I know this is the best version of me. I just got to go out there and prove it.”

She did by increasing her World Cup career scoring total to 10 — third in the U.S. record book — with goals in the 11th and 35th minutes.

The first came on a hellacious half-volley from 17 yards that beat Endler with force and accuracy.

Before Lloyd scored again, Ertz made a near-post run on Davidson’s corner kick and, without looking at the target, nodded the ball into the corner.

Later, Davidson floated a corner to Lloyd for a powerful header from seven yards — her 113th in a national team career spanning 14 years.

With Ertz’s and Lloyd’s ability in the air, Davidson said, “It wasn’t that hard for me.”

The Americans, however, did survive a scare while leading 1-0.

Goalkeeper Alyssa Naeher failed her first test of the tournament, not coming off her line quickly enough to prevent Carla Guerrero from pushing Claudia Soto’s free kick into the net. Guerrero, however, had been a step offside.

Endler, who played at the University of South Florida and is employed by French club squad Paris Saint-Germain, put on a spectacular display in the second half. Despite the defeat, she was named player of the match.

Nonetheless, the Americans improved to 19-1-3 all-time in group play, the only defeat coming to Sweden in 2011. Their shutout streak this year reached six matches and seven in the past eight.

Although a potential quarterfinal clash with France looms, Ellis said her only concern is Sweden.

“Beyond that, there is a lot of grass to navigate between now and our potential matchups,” she said. “France is a fantastic team, but there are a lot of really good teams. That’s why it’s going to be such a great tournament.”