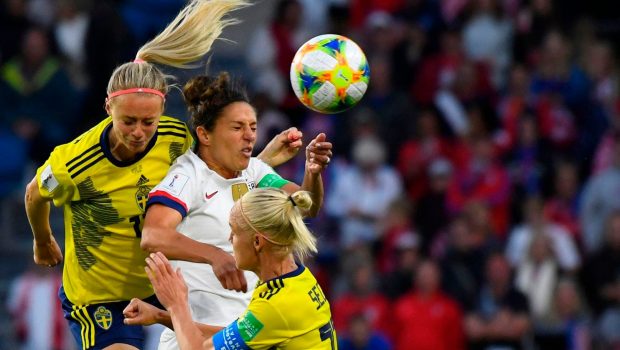 The U.S. national soccer team won again — 2-0 over Sweden — and completed group play in perfect fashion, but the opponent was markedly better than its first two victims.

After 90 solid minutes, highlighted by Lindsey Horan’s goal early in the first half and an own goal early in the second, the top-ranked Americans found themselves atop Group F and looking ahead to the knockout stage, four victories from their fourth world trophy.

They have not been severely tested, but with all of the contenders securing passage, the road is going to get rougher.

In the round of 16 Monday in Reims, they will face No. 13 Spain, the Group B runner-up with a 1-1 1 record. A victory would send them to Paris and a potential showdown against France.

“I don’t really care who we are playing,” forward Carli Lloyd said. “Bring it on.”

The absence of competition in a wipeout against Thailand and a convincing triumph against Chile left the United States yearning for a harder game. The result against Sweden (2-1-0) was never much in doubt, but it required additional work.

“We needed this game against a challenging opponent before we left the group,” Coach Jill Ellis said. “Win, lose or draw today, I said to the players, ‘Let’s see if we can feel good about the performance.’ That’s the confidence-builder.”

Her squad set the tone on Horan’s goal in the third minute en route to a ninth consecutive victory and seventh straight shutout. The last time the U.S. team won all three group matches was 2003. Never before had it blanked every group opponent.

Sweden, which entered with the same record as the United States but trailed on the goal-differential tiebreaker, finished second in the group and will play Canada on Monday in Paris.

“We ended on a good note, and we’re excited about that, but we have to put it behind us and onto the next,” midfielder Rose Lavelle said. “We’re hitting our peak at the right time and I feel like we are going to keep growing throughout the tournament.”

Any suggestions the Americans would try to manipulate the path to the July 7 final by finishing second — thus avoiding third-ranked France — were put to rest with a top-choice starting lineup. It was Sweden that rested several regulars, and afterward, Coach Peter Gerhardsson said it was not important to win the group.

Told of Gerhardsson’s comments, Ellis said with a grin, “After the game, that might be a fair comment.”

She added: “If there is a decision to rest players, I don’t think that’s not caring about the game; it’s already thinking ahead. For us, it was very important to think about what was right in front of us.”

After making seven changes between the first and second matches, Ellis selected her first-choice lineup, with the exception of defensive midfielder Julie Ertz, who was nursing a minor hip contusion.

Also, forward Alex Morgan suffered a minor knee injury in the first half and did not return after halftime. Both seem likely to play Monday.

Leading to the match, the Swedes had spoken of their comfort and confidence in playing the United States, of the Americans perhaps overlooking them and of their success over the years in the rivalry.

The Americans, though, crackled from the start. They were fast and fluid, forcing Sweden to chase. Opportunities opened quickly.

In the third minute, Megan Rapinoe served a low corner kick toward the near post. Samantha Mewis, starting in Ertz’s place, made a near-post run and redirected it with her right foot between the legs of a defender.

The ball skipped into the middle of the six-yard box, where the onrushing Horan poked it into the net from close range for her second goal of the tournament.

The Swedes had been wary of U.S. set pieces, with Gerhardsson saying a day earlier that Ellis had the “thickest binder in the world” of designed plays.

Typically, such a play would involve heading-expert Ertz on the case to meet Rapinoe’s placement. With Ertz absent, Ellis went deeper into the binder.

The Americans continued to fly, racing in transition, moving the ball side to side and testing Hedvig Lindahl from distance.

When they were sloppy, though, Sweden turned opportunity into threats. Naeher had a few busy moments and her back line was sound under pressure.

Tobin Heath influenced the second goal on a play that required video replay and a scoring change.

Rapinoe targeted Lloyd at the top of the penalty area. Although Lloyd was a half-step offside, play continued without her direct involvement.

A Swedish player deflected the ball to the back side. Heath took possession and worked defender Jonna Andersson with a series of foot fakes before driving an angled bid.

The ball nicked Andersson’s extended foot and carried over Lindahl. Initially, Heath was credited with the goal, but because the attempt might not have been on the target without the deflection, it was ruled an own goal.

The video assistant referee recommended a review to determine whether Lloyd’s positioning should nullify the goal. After a two-minute delay, the goal was certified.

Sweden did not have much to offer in the last 40-plus minutes, leaving both sides to look ahead to the knockout stage.