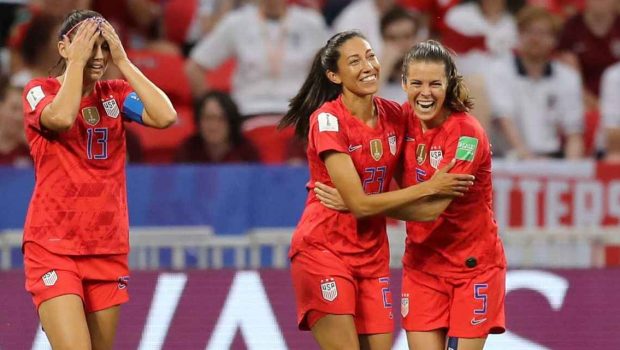 Alyssa Naeher saved a penalty and Alex Morgan headed in the winning goal as the United States survived against England to win 2-1 and advance to the Women’s World Cup final in Lyon, France.

Megan Rapinoe was not in the U.S. lineup, and England coach Phil Neville was forced to start Carly Telford after goalkeeper Karen Bardsley was ruled out with a reported hamstring injury.

Rapinoe, who scored both goals for the U.S. in a quarterfinal win against France, had a hamstring strain and was replaced by Christen Press in the lineup. The selection by coach Jill Ellis paid dividends in the 10th minute, when Press smashed a header past Telford from a Kelley O’Hara cross to make it 1-0.

Following the match, Rapinoe said, “Yeah, just a little minor [hamstring] strain. Day-to-day, but I feel like I’ll be ready for the final. It’s hard three days on the bounce in this old body.”

The opener for the U.S. was the first goal England had conceded in 380 minutes, but the Lionesses got right back in the game when Ellen White redirected a Beth Mead cross that beat Naeher to even the score.

Morgan put the U.S. back in the lead just after the 30-minute mark with a perfect header from a Lindsey Horan ball into the penalty area. Naeher made a miraculous save from Keira Walsh’s long-range shot right after the goal to keep the score at 2-1.

“I can’t even express how proud I am,” Ellis said after the match. “It was just such a great effort from everybody. We had some challenges in terms of bodies and everything, and everybody just stepped up. And that’s what this team’s about. So just incredibly proud of them.”

The U.S. looked lively to start the second half but failed to find an insurance goal and was handed a bit of bad news in the 65th minute, when Rose Lavelle came off with an apparent hamstring injury and was replaced by Sam Mewis.

Minutes later, England looked to have evened the score at 2-2 as White beat Naeher after being played in to the penalty area, but the goal was ruled out due to a narrow offside call following a video review.

VAR came into play again in the 81st minute. That time, the referee consulted the pitchside monitor and awarded England a penalty for a Becky Sauerbrunn foul on White. Naeher came up big again and saved Steph Houghton’s spot kick to preserve the Americans’ lead.

“I just said to [Naeher], ‘That was your shining moment.’ But we’ve got one more game,” Ellis said. “What a freakin’ stop. It was unbelievable.”

England went down to 10 players when Millie Bright was shown her second yellow card for a hard foul on Morgan, and the U.S. held on to see out the result.

The U.S. becomes the first team to reach three straight Women’s World Cup finals. It will be their fifth overall. The Americans set a record for consecutive wins with an 11th straight victory, surpassing Norway’s mark from 1995 to 1999.

Following the match, Rapinoe said the injury was a minor hamstring strain, and she expects to be ready for the final. The U.S. will play the winner of the other semifinal — on Wednesday between Netherlands and Sweden — for the championship on July 7.