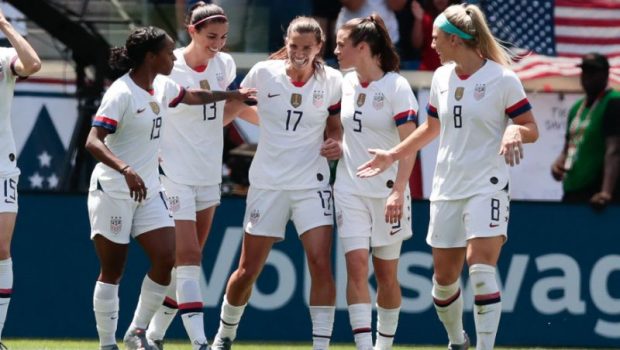 USA HEADS TO WORLD CUP IN FRANCE AFTER 3-0 WIN OVER MEXICO!

Goals by Tobin Heath and substitutes Mallory Pugh and Christen Press lifted the USA over Mexico 3-0 in the final game before heading to the 2019 FIFA Women’s World Cup, which kicks off next month in France.

If the idea was to build confidence ahead of defending the world title they won in Canada four years ago, then the three-match send-off series that culminated with this victory over El Tri at Red Bull Arena — the Americans trounced New Zealand and South Africa earlier this month and didn’t surrender a goal in those games, either — couldn’t have gone much better.

“There were several big takeaways from this,” coach Jill Ellis said afterward. “Being healthy, getting valuable minutes for a lot of different players, keeping a clean sheet, scoring some goals…I think we got a lot of things accomplished today.”

Despite temperatures nearing the nineties, it was one-way traffic from the high-noon kickoff. The hosts peppered Cecilia Santiago’s goal with shots early on, forcing seven saves — a couple of them spectacular — from the Mexican keeper before the first half was over. It only took 10 minutes for the U.S. to take the lead, when Heath pounced on Santiago’s errant pass and fired home from close range.

It took Mexico 18 minutes to touch the ball in the final third of the field. Still, the overmatched visitors, which didn’t qualify for France, managed to get into the locker room at halftime trailing by just a goal.

Considering that the world’s No. 1 team was playing in its send-off game in front of a raucous, near-sell-out crowd just outside of New York City, the Americans’ sharpness against Mexico left a lot to be desired.

At this stage of their preparations, one might expect to see a more well-oiled machine humming away. Not only was the final pass off all afternoon, the U.S., for all their surging runs forward, didn’t dominate the ball; Mexico enjoyed almost half of the possession for most of the match.

This was close to Ellis’s first-choice lineup, too. The only sure-fire World Cup starter who wasn’t in the starting 11 against Mexico was Lindsey Horan, whose workload was being managed after some tough training sessions.

Perhaps heavy legs help explain the sluggishness. After all, the USWNT’s opener against Thailand is still more than two weeks away. But things didn’t get much better early in the second half, when Ellis replaced five field players, moved Heath to left back, and Julie Ertz from defensive midfield to her former spot in central defense.

Only when Mexico began to wilt did the floodgates open; Pugh and Press scored inside the final quarter-hour, with Press’s well-taken strike inside the far post arriving with just two minutes of the 90 to play. As good as the 3-0 result looks, though, there’s no getting around the fact that this team can — and will need to — be much better.

“I think the players would say it as well: We definitely need to be sharper with the final pass,” Ellis said. “We know we’ve got to make it count in those moments.”

Press was quick to point out that in their last World Cup warmup in 2015 in this very stadium, South Korea held the U.S. to a scoreless draw.

“We absolutely can play better than we did today,” Press said. “But it’s a far better place than we were four years ago, and four years ago we won.”

While this wasn’t the rout many were expecting, the truth is it doesn’t really matter. Unlike the She Believes Cup earlier this year, when the U.S. took on top-10 opponents such as Australia, Brazil and Japan, none of these three send-off games came against top-end foes.

After months of talk and tuneups, not to mention a packed schedule of media appearances in New York over the last week, the Americans are eager to get overseas and on with the business of defending their crown on the biggest stage their sport has to offer.

“We’ve been talking about how excited we are to get out of here, no offense to anyone,” captain Alex Morgan said. “We are ready to kind of have that tight-knit community within our team and just continue to build that chemistry.”