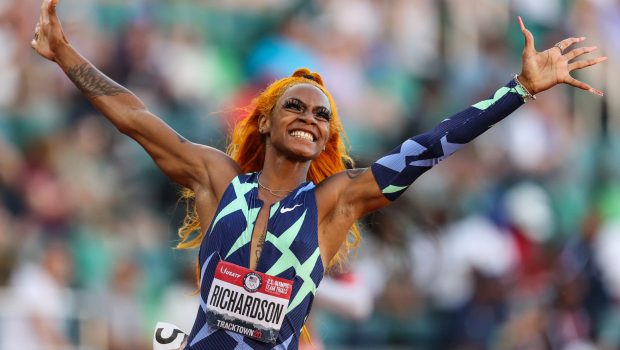 Sha’Carri Richardson, 21, could claim to be America’s fastest woman after winning the 100 meters at the U.S. track and field Olympic trials last month in Oregon, drawing attention for her speed, outspoken nature and billowing orange hair in homage to her athletic hero.

Her time of 10.86 seconds instantly made her a gold medal favorite at the Tokyo Olympics that begin July 23, and it wasn’t even the fastest she has run this year.

Yet her place on the team is in jeopardy because of her marijuana use, putting her at the center of debate and discussion about the drug and the fairness of the rules of the sport as it searches for its next big track star in the United States.

U.S. antidoping officials and Richardson confirmed yesterday that she tested positive for marijuana at the trials, disqualifying her from her signature event.

The 30-day suspension is back-dated to when she tested positive, so she could be available to run in the 4×100 meter relay scheduled for August 8.

Although many states and countries are loosening restrictions on marijuana, it is categorized as a performance-enhancing drug in track in some cases and its use is banned within 24 hours of an event. The primary reason for its prohibition is that it can be used to relax athletes ahead of competition, which can in turn enhance performance.