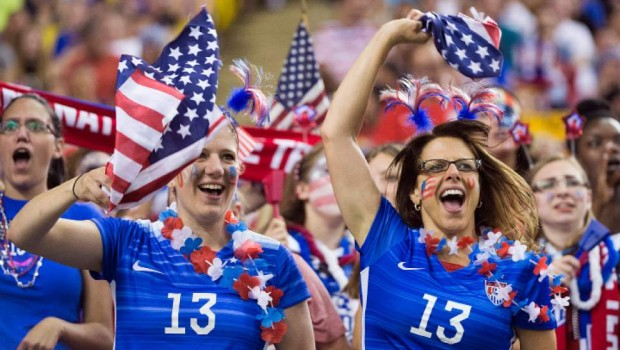 The United States is going to the championship game of the Women’s World Cup, and they beat a top-notch German team to do it.

Relying on a bit of luck and a lot of grit, the USA beat Germany, 2-0, and will face the winner of tonight’s Japan-England match Sunday for the championship..

The Americans, who won two of the first three World Cups but lost the 2011 title game to Japan, dominated the Germans from start to finish. Carli Lloyd scored on a second-half penalty after Germany missed one, and then fed Kelley O’Hara for a clinching score in the 84th minute.

Lloyd, a feisty Delran, N. J., native who delivered the winning goal in the Americans’ quarterfinal win over China on Friday, was the difference again. Freed to roam forward by coach Jill Ellis for the second game in a row, she did just that: teasing, fighting, scrapping and, in the end, scoring.

Her penalty kick in the 69th minute probably should not have been a penalty at all — replays showed Alex Morgan was fouled just outside the area and then fell in — but she buried it in the side netting for her third goal in three games.

Her score came less than 10 minutes after Germany’s Celia Sasic, the tournament scoring leader with six goals, pulled a penalty kick wide left. Again, the United States had a little luck; Julie Johnston, who had commited the foul that conceded the penalty, could have been red-carded on the play but was not.

Instead, the game turned a few minutes later, just as the tournament has turned in the past two games for Ellis and her newly confident team. The Americans struggled in their early performances in the tournament, playing defensively, but have broken out with some tactical changes that resulted in two straight starts on the bench for the veteran striker Abby Wambach.

“It’s not about the system,” Ellis said. “It’s about the players on the field. They played their hearts out tonight.”

Lost in the win was another fine performance by the United States defense. Hope Solo recorded her fifth straight shutout, and the United States extended its goalless streak to 513 minutes — dating to a first-half score by Australia in their tournament opener.