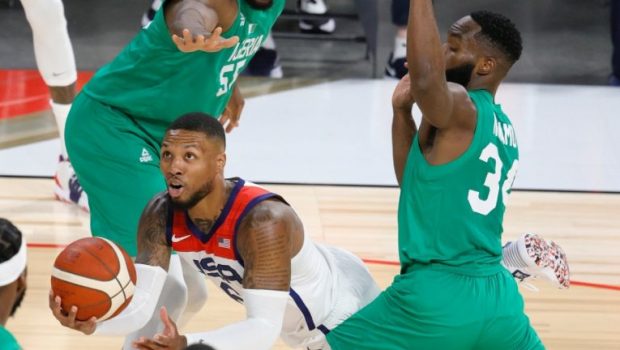 USA AND DAME LILLARD STUNNED BY NIGERIA IN OLYMPICS TUNE-UP!

Team USA was stunned in its first exhibition game before the Olympics by Nigeria 90-87.

Nigeria has seven current NBA players, and that talent showed, particularly in its physical defense and 3-point shooting. But the Americans started five All-NBA players and were unable to deliver against a team that appeared to play more together, a common challenge in international competition.

“In a way I’m kind of glad it happened,” Team USA coach Gregg Popovich said. “It means nothing if we don’t learn from it. It could be the most important thing in this tournament for us. To learn lessons from this.”

Team USA came in with only four days of practice this week, and Friday was a light workout with no scrimmaging. Nigeria first gathered June 20 and had the entire team together since June 27. The difference showed.

When the pressure arrived — as Nigeria overcame a 10-point deficit and made it clear there was a possible upset in the offing — the Americans tightened up and started playing a very isolation-heavy offense. But with players such as Damian Lillard, Kevin Durant and Bradley Beal, Team USA has some of the best isolation players in the world.