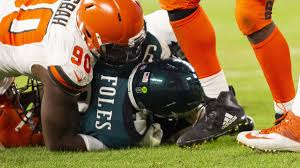 So, Eagles Nation, how are you feeling this morning?

Still on the bandwagon after last night’s woeful performance in a 5-0 loss to the Cleveland Browns by the Lake?

If so, why exactly is that?

Super Bowl memories will only float you so high.

This was a crash to earth as left tackle Halapoulivaati Vaitai failed again to resemble the competent replacement for All-World Jason Peters, who is still recovering from last season’s ACL.

And what about quarterback Nick Foles, who looked like a Pop Warner quarterback behind a very shaky offensive line (above).

There wasn’t much to hang your hat on in this one.

The Eagles remained stagnant and coach Doug Pederson left the stadium with more frustrations and questions than anyone would have expected when training camp kicked off nearly a month ago.

Pederson and his players have long maintained that they can’t rest on their Lombardi Trophy laurels. It’s a new year, they said from the time that they reported for spring practices, and they maintained that message as training camp began.

The Eagles understood that things change far too quickly in this league, and although the New England Patriots make it look easy, it’s far more difficult to remain atop the heap than it is to ascend from the basement.

But no one in the organization anticipated the struggles we’ve seen from Super Bowl MVP Nick Foles and the offense.

No one could explain a first-half performance that featured two Foles interceptions, a fumble, a safety, a turnover on downs, and a fumble by running back Matt Jones.

“It’s not fun playing the way I did. I really hurt us tonight,” Foles admitted after the game.

And exiting halftime, Pederson vented to Fox reporter Erin Andrews about Foles, saying, “I don’t know (what’s wrong with him). It’s very disappointing. He was calm before this game, I thought he would settle in. Not the case.”

Five starters (quarterback Carson Wentz, running back Jay Ajayi, receivers Alshon Jeffery and Nelson Agholor and left tackle Jason Peters) did not suit up. There was so much shuffling that left guard Isaac Seumalo also wound up lining up at center, left tackle and tight end during the first half.

But it’s how the Eagles played — and have played throughout the preseason – that proved concerning and frustrating for Pederson. Tight end Zach Ertz said it best when he said, “everyone is pressing.”

That’s not good. Throughout their improbable run to the Super Bowl, the Eagles were as loose a team as the postseason has ever seen. They donned rubber dog masks, embracing their underdog billing. They danced, they rapped and sang, and on the field they flew around on defense and on offense. They generated fireworks, running all kinds of creative plays.

But now that they’re pressing, the Eagles are playing into the skepticism that numerous league insiders had about them entering this season.

How would this team handle prosperity? Will these players, most of whom had never experienced postseason success, manage to maintain the same kind of hunger post-Super Bowl? Can they maintain the same high level of play under the weight of expectations?

Perhaps the Eagles will flip the switch once back to full strength on their Sept. 6 season opener against Atlanta. But much work — as much mental as physical — lies ahead in a short amount of time.

Meanwhile, it feels like the Browns have already flipped their switch. This doesn’t feel like the train wreck of a team from the last two years (1-15 in 2016, 0-16 last year). The perception has changed thanks to the credibility new general manager John Dorsey, his staff, and plentiful talent acquisitions now offer.

One NFC scout attending the game offered his take on the new-look Browns, saying, “There’s a lot of talent across the board here now. They’ll be able to hurt you in a lot of ways.”