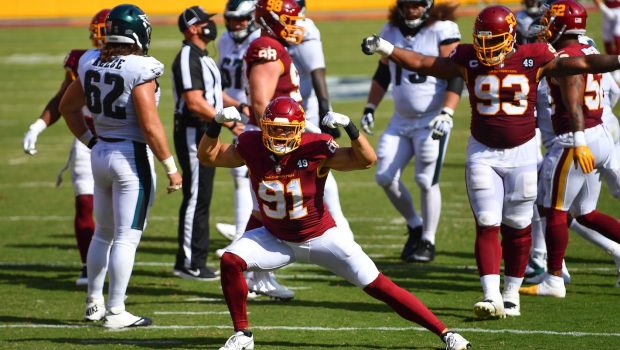 UP 17-0, WOEFUL EAGLES AND WENTZ CHOKE AWAY OPENER IN DC!

In a way, the Eagles loss to the Washington Football Team today was poetic.

There were no fans at FedEx Field because of the pandemic.

And if there had been, it would have been hard to watch for Eagles fans.

Because the Eagles raced to a 17-0 lead on Carson Wentz TD passes to Zach Ertz and Dallas Goedert and a Jak Elliott field goal.

And then they fell apart, allowing eight sacks on Wentz as the WFT rallied for a 27-17 victory.

Washington snapped a six-game losing streak vs. the Eagles.

The Birds scored on three of their first four possessions as Washington struggled in all facets. Their defense allowed big plays, jumped offsides at inopportune times and made life easy for the Eagles’ offense.

Rivera had preached all summer to his players about the mindset needed to play a strong game for four quarters. He chastised them — loudly — after bad practices and praised them for any improvement.

Still, the turnaround Sunday seemed unlikely when Philadelphia took over with 1 minute, 44 seconds remaining in the first half and owning the three-score lead. But the turnaround began when corner Fabian Moreau intercepted Wentz on the next play. It led to a Dwayne Haskins to Logan Thomas touchdown pass.

From that point forward, Washington dominated. The Eagles gained 175 yards in the first half; they finished with 265 for the game.

Washington running back Peyton Barber broke a 17-17 tie with a three-yard touchdown run in the fourth quarter. It came two plays after Rivera eschewed an easy field goal by going for it on fourth-and-1. Barber picked it up — barely. But by that point Washington was playing with confidence and Rivera, who earned the nickname Riverboat Ron in Carolina for his aggressive ways, capitalized on the momentum.

It was Rivera’s first game coaching Washington after nine years in Carolina. He’s had to deal with not only a pandemic and social justice issues, but also a name change, stories of sexual harassment in the organization from previous years and his own cancer diagnosis. Rivera missed practice on Tuesday for his first chemotherapy and proton treatment. He needs to have five treatments a day for seven weeks.

But through it all Rivera had said he just wanted Washington to play good football, knowing it would take time to rebuild a team that went 3-13 a year ago. He also called this game a measuring stick. If that’s the case, Washington measured out quite well — at least for the final two quarters.