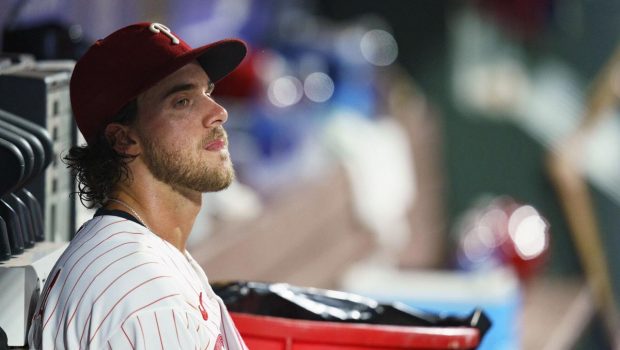 All of a sudden the Phillies are in a fight with the Mets for the top spot in the NL East after last night’s split with the Marlins and the Mets loss.

The Phils are only three games behind.

And Aaron Nola will return to the Phillies’ rotation on Tuesday night and start against the New York Yankees at Yankee Stadium.

Nola was scratched from his previously scheduled start Sunday in Boston after coming in contact with Alec Bohm, who had tested positive for COVID-19 the day before.

Nola will be activated before Tuesday’s start in the Bronx. He showed no symptoms.

He hasn’t been vaccinated against COVID-19.

Nola said “it sucked” having to be scratched from pitching in Fenway Park last weekend.

He was asked if the experience might prompt him to get vaccinated.

The Phillies are one of just seven teams that have not reached the 85 percent vaccination rate that would cause some COVID protocols to be relaxed. Girardi, who has been vaccinated, doubts the Phillies will get to 85 percent.

“I think the people that have not been vaccinated probably won’t get vaccinated,” he said. “That would be my guess.”

All this put the Phillies at risk of playing shorthanded during games that could have great importance during the second half of the season.

“Yeah, that’s crossed our minds,” Nola said. “We’ve got to be careful.”

The Phillies have provided players with safety information about the vaccine, but there are still doubters in the Phillies clubhouse. Nola said he’s felt no pressure in the clubhouse to shun the vaccine.

“I haven’t really heard any of that,” he said. “I haven’t heard anybody say that. I just think they’re personal choices. It’s each guy’s choice to do it or not do it.”