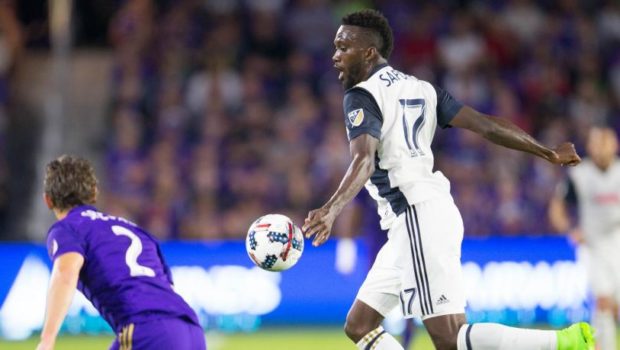 The Union fell to Orlando City 2-1 in front of a sold out crowd of 25,527 at Orlando City Stadium last night.

The Lions counted on a brace from Cyle Larin to lift them over Philly.

The Union got off to a slow start in the first 45 minutes of action. Goalkeeper Andre Blake made great saves against the relentless Orlando attack in the first half, particularly in the ninth minute against Carlos Rivas who came charging towards the keeper. Blake was able to clear the threat while clearing Rivas in the process.

Orlando finally broke the scoreless tie with a goal in the 39th minute. In transition, Jonathan Spector sent a pass to a streaking Carlos Rivas who found Larin. The Canadian sensation was able to find the back of the net for the first of his two goals on the night.

The Union came out much sharper in the second half creating pressure in Orlando’s zone, evening the match with a goal from CJ Sapong (above).

MLS All-Star Keegan Rosenberry got the play started with a delivery to Fabian Herbers who sent a ball into the box. Union Captain Alejandro Bedoya got a piece of the delivery that may have grazed an Orlando defender. The end result saw Sapong equalize the match with a perfect header, leaving Orlando keeper Joe Bendik with no chance in the 52nd minute.

Larin was able to record his second of the night which would prove to be the game-winner in the 73rd minute. Larin was fed an excellent ball from Matias Perez Garcia, from there it was a footrace to the net. Larin was able to beat the 2016 Goalkeeper of Year Blake to give the Lions the lead.

The Union had a late push for the equalizer thanks to subs Ilsinho, Fafa Picault and Roland Alberg. In stoppage time the Union sent a full on rush that sent the sold out crowd in Orlando into a panic. Ilsinho sent a missile that seemed destined for the back of the net, but bounced off the post.

Moments later Picault sent a beautiful ball into the box that found the head of Bedoya, but Bendik made the save of the night denying the equalizing effort, sending the crowd into a frenzy. Orlando was able to hold on and secure three points.

Philly will be back in action on April 1 when they travel just south to take on D.C. United at RFK Stadium. The club will be out of MLS action next week due to the international break.