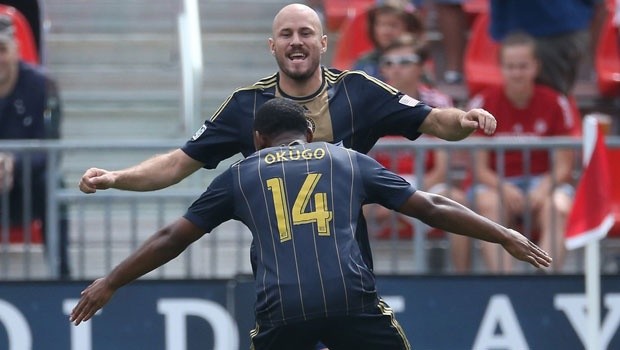 The Union beat Toronto FC for the second time in four days, taking a 2-0 win at BMO Field to wrap up a home-and-home against their Eastern rivals and leapfrog them in the standings. The visitors scored on two first-half headers, including another game-winner from former Toronto FC forward Conor Casey (celebrating in photo above), who now has seven goals in 15 all-time matches against TFC.

Casey’s early strike in the 8th minute set the tone for the rest of the match. After Toronto failed to clear their lines on two separate occasions, the ball fell kindly to the foot of Philly’s Sheanon Williams out wide on the right. The right back swung the ball into the box where Casey met it with his head, beating goalkeeper Joe Bendik for a 1-0 lead.

Toronto FC, who started veteran Dwayne De Rosario for the first time since April, attempted to find the equalizer, but despite maintaining prolonged possession they couldn’t find a way through an organized Union side. And Philly answered by counterattacking with poise and confidence. Just one minute before the halftime whistle, the visitors were rewarded with a second goal.

The ball bounced off the head of three different Union forwards before finally being directed at goal by 23-year-old Andrew Wenger, who beat Bendik again with a free header in the box for a comfortable 2-0 lead at the break.