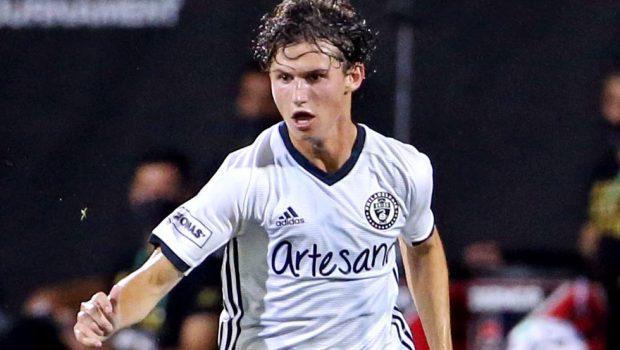 The Union have scored a boatload of finalists for Major League Soccer awards:

Goalkeeper Andre Blake leads the way as the club’s first-ever finalist for the Landon Donovan MLS MVP award. The Jamaican international is also up for the Allstate Goalkeeper of the Year award. After leading the club to the MLS is Back Tournament semifinals, Blake was a brick wall throughout the regular season, collecting eight shutouts and the highest save percentage in the league as he guided the Union to the Supporters’ Shield.

Homegrowns Brenden Aaronson (above) and Mark McKenzie are up for awards as well. Aaronson is a finalist for the AT&T Young Player of the Year while McKenzie looks to claim Defender of the Year honors after a stellar season at the heart of the Union’s defense.

Aaronson led the Union with seven assists and added four goals while playing in all 23 regular season contests for the Boys in Blue. 21-year-old McKenzie rose to the challenge of stopping the opposition’s top scoring threat every game with a team-high 17 blocked shots. He played a large role on the other end of the field too, scoring his first two MLS goals while contributing three assists.

Head Coach Jim Curtin joins McKenzie and Aaronson with his first end of season finalist recognition. The long-serving head man is up for the Sigi Schmid Coach of the Year award after guiding the club the league’s first perfect home record with a 9-0-0 mark at Subaru Park. The sixth-year-coach’s philosophy matched the club’s identity by giving opportunities to young players while earning an impressive string of positive results. 14 wins and 47 points put the Union at the very top of the MLS table when Decision Day came to a close.

MLS will announce the award winners starting on Monday, November 16th with the Allstate Goalkeeper of the Year Award.