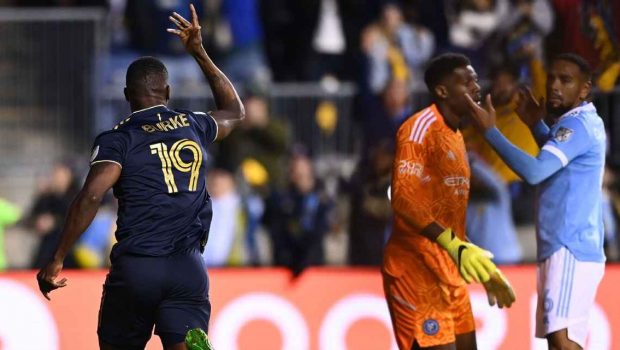 The Union will play host LAFC in the MLS Cup final after coming from behind to score three second-half goals and beat defending champions New York City FC 3-1 in Sunday’s Eastern Conference Final.

After NYC took a 57th-minute lead through Maxi Moralez, Philadelphia responded swiftly in pulsating fashion with three goals in 11 minutes through Julian Carranza, Daniel Gazdag and Cory Burke to send the Union to MLS Cup for the first time in the club’s 13-year history.

LAFC defeated Austin FC 3-0 in the Western Conference final earlier on Sunday, meaning that MLS Cup will be a battle between the two No. 1 seeds for the first time since 2003.

For Philadelphia and coach Jim Curtin it is a long-awaited breakthrough after winning the Supporters’ Shield in 2020 and consistently improving and challenging year on year.

And it will be particularly sweet after falling at the same hurdle in 2021.

Sunday’s game was a rematch of last year’s Eastern Conference final at the same venue, when NYCFC won 2-1 against a Philadelphia team that was decimated by a COVID-19 breakout.

While nothing on that scale, both teams came into this game with some big injury concerns as well. For Philadelphia, captain Alejandro Bedoya returned to the starting lineup for the first time in this year’s playoffs but lasted just 45 minutes before having to be substituted.

On the NYC side, interim head coach Nick Cushing was given a boost by the presence of Moralez but was without key defender Maxime Chanot as well as forward Talles Magno.

The Union had the better of a physical first half but neither team created a clear goal scoring opportunity. The home side had the ball in the net in the 16th minute but the flag was immediately raised for offside on Gazdag after he headed in a Kai Wagner free kick.

Outside of that, Sean Johnson in the NYCFC goal was able to save comfortably from shots by Gazdag and Carranza late in the half.

It wasn’t until just before the hour mark that that the game exploded into life.

NYC put together the best move of the game to that point, going from back to front and culminating with Santiago Rodriguez laying the ball off to Moralez, who from just outside the box finished with trademark quality with a low shot drilled into the corner of the net.

Within three minutes NYC’s lead looked set to be doubled only for MVP candidate Andre Blake to pull off a sensational full-stretch save to keep out a point-blank header from Alexander Callens.

As so often for the Union, Blake’s intervention proved to be crucial.

Five minutes later, in the 65th minute, the home team was level. NYC was caught napping as Jakob Glesnes played a quick free kick down the side of its defense and Carranza finished clinically past Johnson.

Within two minutes more Philadelphia was in front and the decibel volume inside an already rocking Subaru Park surged yet higher.

Carranza was again heavily involved, this time cushioning a perfect header into the path of an unmarked and onside Gazdag to side-foot high into the net from inside the six-yard box.

With NYC still reeling from the dramatic turn of events, it found itself two goals behind in the 76th minute.

This time it was all about substitute Burke as he muscled Justin Haak off the ball and surged into the box before getting a touch of fortune as the ball broke back to him off a defender.