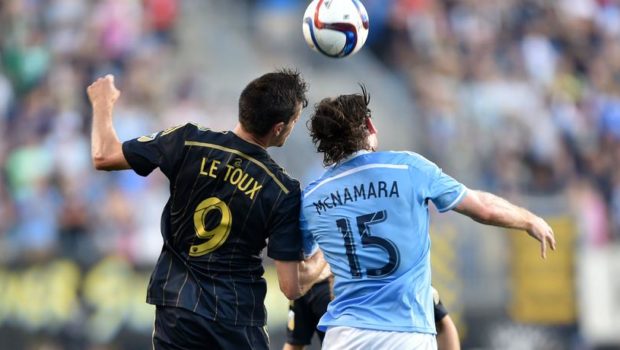 New York City FC piled on the Union as David Villa scored a remarkable goal from near midfield to seal a 2-0 win for Patrick Vieira’s team last night in Chester.

After a slow opening 20 minutes, the match opened up. Jack Harrison turned Philly over in its defensive third, took two touches and fired just wide of the Union goal.

The Union countered right away with U.S. international Alejandro Bedoya stinging Sean Johnson’s hands with a low, line drive from 18 yards out.

Villa tried his luck next from the top of the Union penalty area following a nice cutback pass from Rodney Wallace, but the former Spain international’s shot was blocked away by a defender, bringing penalty shouts from the visitors.

A Union turnover led to NYCFC’s opener, as Ronald Matarrita sprang Harrison in the Philly area and he finished for his second goal of the 2017 season.

Blake saved Philly going down two goals twice within seconds in the 67th minute as he blocked an easy one-on-one chance for NYCFC before Wallace scuffed the rebound. Maxi Moralez then had his close-range attempt tipped over the crossbar by the Jamaica international.

Villa then scored NYCFC’s second from 50 yards out, catching Blake off his line and floating the ball well over the Union goalkeeper’s head

The result means the Union are still winless in 2017, with manager Jim Curtin already feeling the heat for last year’s surprise playoff package.