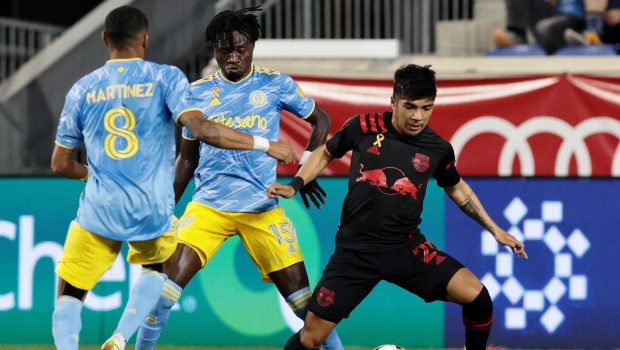 UNION SETTLES FOR DRAW WITH RED BULLS, TIED FOR 4TH IN MLS EAST

Omir Fernandez scored the tying goal in the 37th minute as the host New York Red Bulls posted a 1-1 draw against the visiting Union.

The Red Bulls (8-11-7, 31 points) pushed their unbeaten streak to four games (2-0-2) to match a season high thanks to Fernandez’s third goal in four games.

Fernandez leveled the game with an impressive sequence late in the first half. Under pressure by two defenders in the center of the box after getting a pass from Cristian Casseres Jr., he had his back to the net but was able to quickly turn around and fire a right-footed shot into the bottom right corner.

Santos got his second goal against the Red Bulls this season when he got the ball off a scramble following a corner kick. He finished off the play by tapping the ball into the center of the net with a right-footed shot.

Santos nearly scored his second goal of the match in the 17th minute when he converted a feed from Leon Flach. The goal was quickly waved off due to an offsides call and was upheld following a quick video review.

Red Bulls goalkeeper Carlos Coronel made one save and also had the long ball that ultimately resulted in Fernandez’s tying tally.