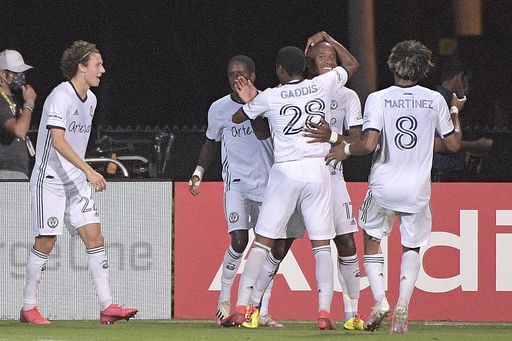 Kacper Przybylko had assists on the first two goals for the Union, who are 4-1-0 in their past five games.

Union goalkeeper Andre Blake made three saves for shutout, his sixth of the season.

In the 20th minute, highly touted Inter Miami forward Gonzalo Higuain received a cross in the box and sent a bicycle kick off the post. It was the Major League Soccer debut for the 32-year-old Argentina international.

The Union took a 1-0 lead in the 25th minute when Fontana ripped a shot into the upper corner of the goal for his fourth of the season.

Higuain had another strong scoring chance in the 36th minute, but Blake was able to clear the ball after a shot from the corner of the goal.

Philly’s Sergio Santos fired a left-footed shot from the top of the box in the 55th minute, but Miami goalkeeper Luis Robles punched the ball out.

Inter Miami nearly scored in the 62nd minute when Ben Sweat sent a bending shot toward the upper corner of the net. Blake was able to tip the ball just wide.

The Union extended their lead to 2-0 in the 69th minute when second-half substitute Ilsinho tapped a shot past Robles directly in front.

After a video review, Inter Miami were awarded a penalty kick for a handball on Przybylko in the box. In the 77th minute, Higuain shot the penalty kick over the goal and appeared visibly frustrated.

Nine minutes of stoppage time was added on at the end, and Aaronson capitalized to score the Union’s third goal in the 97th minute. Aaronson, 19, reportedly reached a deal this week to join RB Salzburg in Austria following the current MLS season.