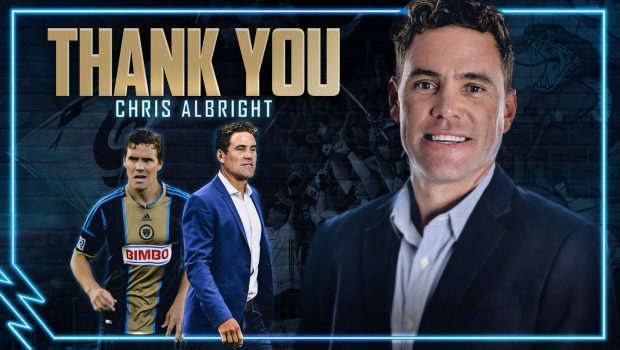 UNION LOSING CHRIS ALBRIGHT TO CINCY, WHERE HE’LL BE GM!

“Once it became clear that Philly was getting a team in 2009, it quickly became a dream of mine to be a part of this organization, and I’m extremely grateful for my time here,” Albright said.

Albright joined the Union as an assistant technical director in January 2014, before being promoted a few months later in June. Over the course of his seven seasons in his role, Albright was integral to both the recruitment and development of players as well as salary cap management, propelling Philadelphia to one of the top clubs in spend efficiency the last three seasons.

A Philadelphia native, Albright played high school soccer for Penn Charter before playing for the University of Virginia where he became an All-American. Following his two-year collegiate career, Albright signed with D.C. United where he helped D.C win its third MLS cup.

Albright would go on to play for five clubs over 14 seasons in MLS where he played making 235 appearances and scoring 11 goals and adding 22 assists in regular season play. He also accumulated numerous awards and accolades over that time including: three MLS Cup titles, named a three-time MLS All-Star, a two-time winner of the Supporters’ Shield, a Lamar Hunt U.S. Open Cup title, and earning a spot on the MLS Best XI in 2005 as well as earning 22 caps with the U.S. Men’s National Team.