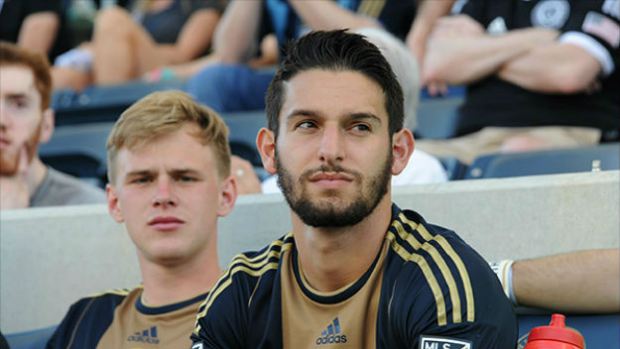 D.C. United hasn’t lost at RFK Stadium in Washington in a year, but the Union put the fear of God in them yesterday.

However, Chris Rolfe scored on a penalty kick in the 84th minute and D.C. United beat the Union 2-1.

Rolfe and Philly’s Zach Pfeffer (above) battled for a service near the left side of the box and the ball deflected off the defender’s arm, resulting in the penalty call.

Things started well for the Union. Just 5 minutes in, Andrew Wenger weaved his way laterally through the top of the 18-yard box until United’s defense broke down. He found Sebastien Le Toux on the right flank alone, and his power right-footed shot beat Bill Hamid easily.

D.C. snapped a three-game winless streak and ran its home unbeaten streak to 19 games – with 15 of the matches in MLS play – to tie the club record. United moved to 7-3-4, padding its lead in the Eastern Conference to five points over New England.

Both teams had opportunities in the middle of the half. In the 34th minute, Steve Birnbaum appeared to score with a header, but Fabinho cleared it off the line. Two minutes later, Wenger broke in alone on Hamid, but his blast hit the crossbar and caromed away from D.C.’s goal.

United, though, equalized in first-half stoppage time. Taylor Kemp’s left-footed service came from wide on the left wing and found Chris Pontius at the penalty spot, where Pontius flicked a header into the far upper corner past the diving Brian Sylvestre.

Philly had a golden opportunity to go ahead in the 60th minute, but Fernando Aristeguieta’s left-footed shot from the center of the box was saved in the top left corner by a leaping Hamid.