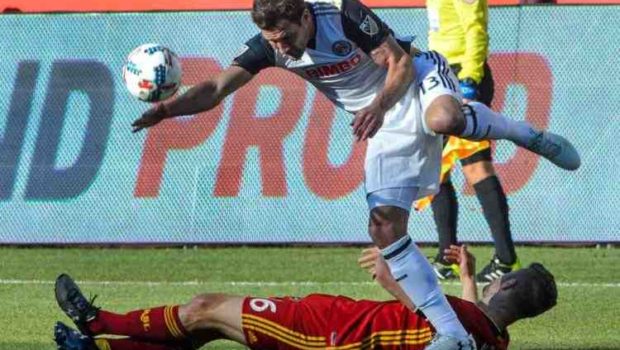 The Union had multiple chances in the first half to grab the early lead. In the 11th minute rookie defender Jack Elliott was inches away from breaking the scoreless tie. After a dangerous ball in off a corner from Haris Medunjanin, Elliott’s header bounced off the cross bar and over the net.

The Union had their best chance of the night to get on the scoresheet in the 17th minute. After forward CJ Sapong won possession from Real Salt Lake, he dished a pass to Medunjanin who sent a long ball towards the RSL net for a streaking Fafa Picault.

Picault was able to get past the RSL defenders and after one touch got off a shot, but RSL goalkeeper Nick Rimando denied him at the top of the box. The clearing attempt bounced right back to Picault who sent a header towards the empty net. RSL defender Aaron Maund was sent sprinting and was able to clear Picault’s attempt just before the ball crossed the line to keep the match scoreless.

The 2016 MLS Goalkeeper of the Year Andre Blake had a sensational night making save after save against RSL, including several diving efforts to keep RSL off the board. Blake finished with seven saves which was his new season high.

Real Salt Lake was able to break through in the 36th minute thanks to a give-and-go combination play in the Union box. Joao Plata fed Jefferson Savarino, who then gave the ball right back to Plata. A soft touch found the back of the net to give RSL the lead.

After multiple attempts to equalize in the second half, the Union had their best opportunity in stoppage time. In the 93rd minute, Medunjanin stepped up to take a free-kick looking to replicate his game-winner last week against Colorado.

Medunjanin beat the RSL wall, but Rimando was there to deny the shot attempt. After a mad scramble in the box to get another shot attempt, Real Salt Lake ultimately sent a clearing attempt towards midfield escaping danger as the final whistle blew with the Union falling 1-0.