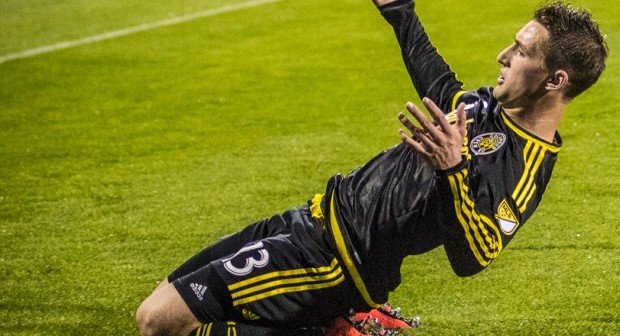 UNION ‘GOT OUR ASSES KICKED’ IN 4-1 LOSS AT COLUMBUS

Union manager Jim Curtin is starting to sound like former Flyers coach Craig Berube, who was fired last week because he couldn’t persuade his players to be better than they really were. He kept saying, “We’ve got to play better.”

After the Union got pummeled by the Columbus Crew SC 4-1 Saturday night in Columbus, Curtin said:

“We got our asses kicked tonight. It’s unacceptable.”

But after falling to a 3-0 first-half deficit, the Union could not recover and ultimately fell 4-1, and following the game, they were left to ponder what happened.

“We don’t want to have this sick feeling at halftime again,” Union midfielder Brian Carroll told reporters after the game.

You wouldn’t have guessed the final score based on the opening minutes. In fact, Curtin praised his team’s effort in the early stages of the match, before Kei Kamara gave the hosts a lead they never relinquished in the 21st minute.

“From that point on, we got embarrassed the rest of the first half,” Curtin said.

“[We] came in at halftime, talked about guys showing more commitment, showing me who wants to stay on the field and be with the group. And I think we pushed the game a little bit, had a decent second half. Credit to Columbus, they’re a great team, they’re in good form right now, confident, and I think they’re a top team in our league.”

But despite a consolation goal from Eric Ayuk in the second half, who teammate Ray Gaddiscalled a bright spot on the night for “[doing] what he was supposed to do” after coming off the bench, the Union are only left to regroup and look ahead to the next game against Toronto FC next Saturday at the friendly confines of PPL Park.

“We got our asses kicked tonight. It’s unacceptable,” Curtin said. “You have to get up off the mat, though. We want guys that are going to stick with this thing.

“I learned a lot about a lot of players tonight, the guys that stuck with it and pushed, and the guys that bailed out. You want to be able to look yourself in the mirror after a game and say you gave everything. That’s what we talked about before the game, and I think we got a lot of answers in the second half, especially those that stuck with it.”

And will Curtin be looking to mix up the lineup moving forward?

“We’ll go look at the tape, we’ll probably have some changes to our [starting] 11 for the next game, that is for sure,” he said. “Any time you give up four goals there’s some issues in the whole group. So we’ll look at it from the forwards all the way back to the goalkeeper, we’ll evaluate everything in between [and] put the best group on the field to get a good result against Toronto.”

Said Carroll: “We are ready to pick ourselves up and do better going forward now.

“Really, we’re just looking for a win any way we can get it,” he added. “So whether that’s making our own luck, whether that’s luck that happens, we’ll take it. We just want to stick together, work hard and do what needs to be done to get a win.”