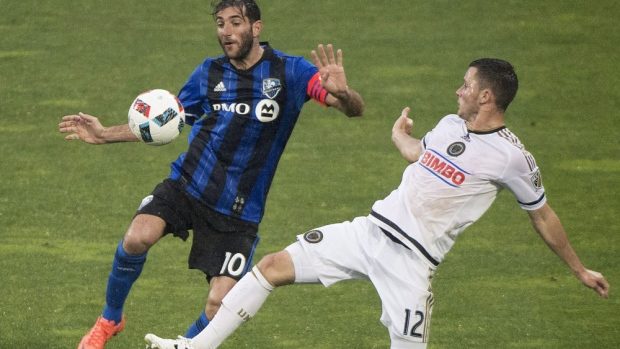 Matteo Mancosu tied it with a header in the 88th minute and the Union held on for a 1-1 draw with the Montreal Impact last night in Chester.

Hernan Bernardello crossed in a diagonal chip pass and Donny Toia flicked it along through the middle of the Union defense to set up Mancosu’s goal for the Impact (9-8-11).

“We played a good away game against a direct rival. We could have scored more, with the chances that we created, but we have to be pleased, because we played well and picked up an important point.”

Union (11-10-8) goalkeeper Andre Blake injured his hip on the play from a diving attempt to make a save but stayed on for the remainder of the contest.

Tranquillo Barnetta opened the scoring in the 45th minute on a straightaway left-footed shot from 25 yards. It was Barnetta’s fifth goal of the season.

“We played well for most of the game,” said Impact coach Mauro Biello.

“We saw good things on both the defensive side and the offensive side. The goal at the end is the result of all the work that my players put in. This is a good point that we pick up against Philadelphia, and I’m pleased with the game.”