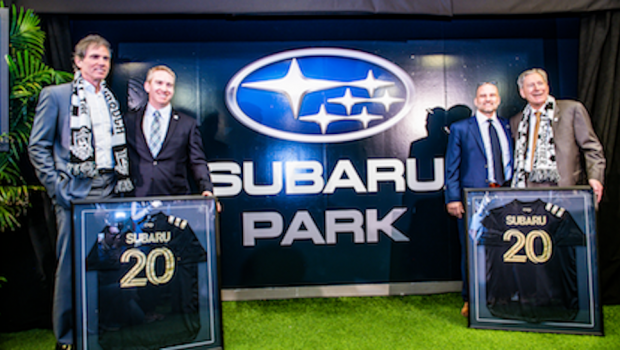 The Union are playing a friendly in Dallas today and then one in Washington against DC United before starting the official 2020 MLS season on Feb. 29 in Dallas.

And yesterday they made some news.announcing a multi-year stadium naming rights deal with Subaru of America.

In addition to the naming rights deal, the automaker whose U.S. headquarters is in Camden, N.J. is now the team’s exclusive automaker partner and will support outreach programs centered around environmental sustainability, youth soccer, pediatric cancer and pet adoption.

Team and company officials both emphasized that the partnership goes beyond the new stadium name during a press conference at the stadium.

Players from Roxborough Soccer Club were on hand for the announcement and to accept the first equipment donation from Doll. Discussions between the two parties started about a year ago.

“This is a process you can’t dictate the outcome but I can’t imagine a better outcome,” Union majority owner Jay Sugarman said. “When we started to spend time with Subaru and saw the qualities that matter to them, how they built their identity over the past ten years, going from a brand that frankly most people had almost written off to something very special, very connected to the community, very connected to their customers those kind of sound like the things we as the Union want to have as well.”

The team also announced improvements to the stadium, which include a larger videoboard, three new parking lots and a free, first-come, first-serve parking area for Subaru drivers in Lot B.