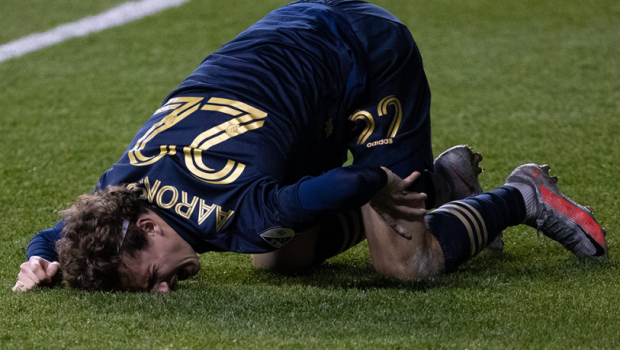 So this was it?

The Union, hyped by Inky fan boy Jonathan Tannenwald as the savior of Philly sports this pandemic 2020, played the New England Revolution last night in Chester in the first game of what Tannenwald assured us would be a march to the MLS Cup.

After all, the Union had run the gauntlet of the MLS all year and won the Supporters Shield, the symbol of supremacy but a stupid name nonetheless.

And then they played the game at Subaru Park.

Adam Buksa and Tajon Buchanan each scored first-half goals and the Revolution upset the top-seeded Union 2-0.

And that’s it for the Union until next year.

No title or championship parade.

New England had been 0-4-1 against the Union this season.

The Union lost at home for the first time this season. In the regular season, the Union went 9-0-0 at home while allowing only four goals.

Even with MLS Goalkeeper of the Year Andre Blake back from a fractured right hand, it wasn’t enough of a spark for the Union to advance.

The Revolution had a strong scoring chance in the 13th minute as Gustavo Bou’s shot in the box was deflected off Union defender Jakob Glesnes and went just wide of the goal.

Philly looked out of sync on offense over the first 25 minutes, producing no shots on goal.

New England took advantage in the 26th minute when Buksa headed in a free kick from Gil for a 1-0 lead.

In the 30th minute, the Revolution went ahead 2-0 when Buchanan — the No. 9 overall pick in the 2019 MLS SuperDraft — dribbled in all alone and sent a right-footed shot past Blake.

Philly’s Kacper Przybylko was able to head a cross on goal in the 36th minute, but Matt Turner was in position to make the save.

Gil nearly gave the Revolution a three-goal lead in the 52nd minute when he chipped a shot directly off the crossbar.

Second-half substitute Ilsinho infused some energy into the Union and was fouled in the 64th minute, which resulted in a free kick. However, Przybylko headed the kick straight to Turner.

From there, the Union created very little offensive pressure through the end of regulation and five minutes of stoppage time.

When it was over, the Revolution celebrated a second consecutive playoff victory. They beat the ninth-seeded Montreal Impact 2-1 on Friday in the play-in round.