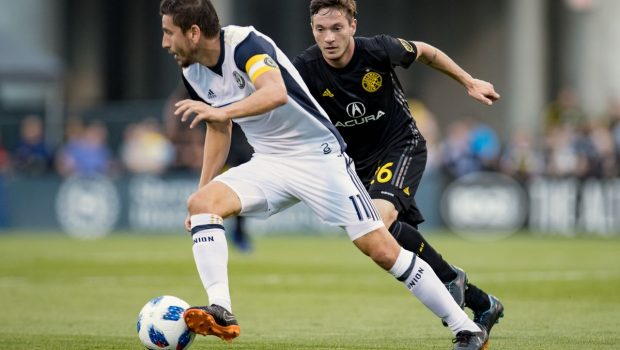 UNION FADES TO 3RD PLACE AFTER SHUTOUT BY COLUMBUS

Youness Mokhtar and Pedro Santos scored and Eloy Room had three saves to lead the host Columbus Crew to a 2-0 victory over the Union.

The loss dropped the Union (16-10-7, 55 points) into third place in the Eastern Conference heading into the final week of MLS action.

The Union is tied in points with second-place Atlanta United (17-12-4), which owns the tiebreaker. The defending MLS Cup champs host New England in their final game while the Union plays first place NYCFC.

The two teams combined for just two shots on goal, both by the Crew, during a scoreless first half. Midfielder Luis Diaz had the best scoring chance in the 15th minute, when he blasted a right-footed shot from the top of the right side of the box off a Harrison Afful pass, but it sailed over the top of the crossbar.

The Union had a chance to take the lead in the 51st minute when Kacper Przybylko broke in on the right side and fired a shot from the edge of the 6-yard box. Room deflected it wide of the goal.

Mokhtar, who joined Columbus on July 19 via Targeted Allocation Money from Stabaek of the Norwegian First Division, scored his first MLS goal in the 69th minute. The 28-year-old midfielder took a pass of the left side of the box from Santos and then dribbled into the center of the box, where he fired a right-footed shot past Blake.

Santos made it 2-0 four minutes later with his 11th goal of the season. The score came when Blake punched out a crossing pass outside the box, where Santos picked it up and then bounced a shot through traffic and past Blake for his sixth goal in the last 10 games. 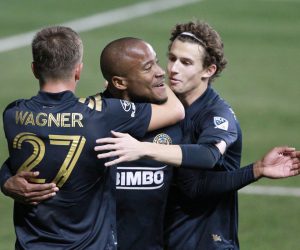 HATTY’S OFF TO SERGIO SANCHEZ AS UNION TIES FOR 1ST PLACE! 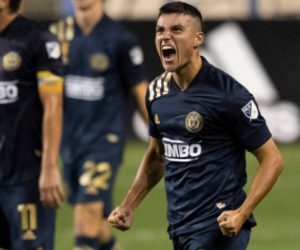