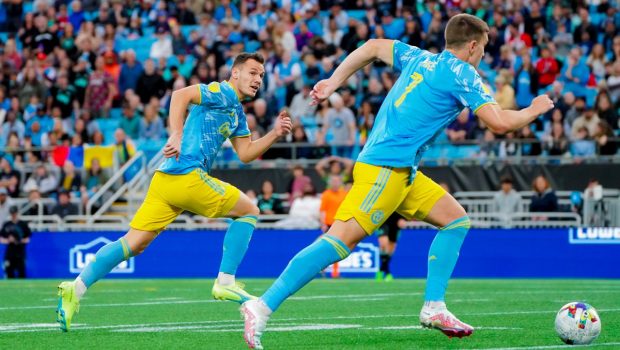 Rios scored in the 24th, 54th and 72nd minutes and in extra time. His third goal came on a penalty kick.

The outcome prevented the Union (18-5-10, 64 points) from clinching the Eastern Conference title. Philadelphia has a home game Oct. 9 against Toronto to conclude the regular season.

Charlotte FC (13-17-2, 41 points) have won three games in a row, avenging a shutout loss to Philadelphia in April.

Pablo Sisniega needed just one save for the shutout. Philadelphia compiled 13 shots, but only one was on goal.

Rios, a 27-year-old midfielder, had a total of just two goals in 13 previous starts this season for Charlotte FC.

Rios put his penalty kick in the bottom left corner of the goal for the hat trick before tacking on another goal.

Kamil Jozwiak assisted on the first two goals for Charlotte FC. Orrin McKinze Gaines II was credited with an assist on the final goal.

Kai Wagner of the Union was charged with a hand ball in the box that led to Rios’ penalty kick. Wagner’s second yellow card resulted in a red card. The Union played the rest of the way with 10 men.

The Union have already secured a postseason spot, but this wasn’t the type of performance it was looking for in the final road game of the regular season. It was the second game in a row in which Philadelphia failed to score, though the previous such situation resulted in a 0-0 draw with Atlanta.