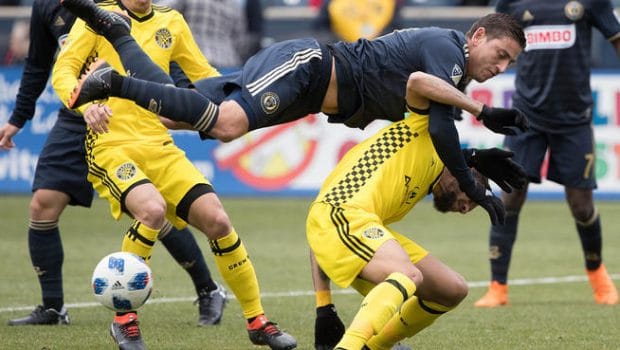 The Union fought to a 0-0 draw against Columbus Crew SC yesterday at Talen Energy Stadium.

With the draw, the Union remain unbeaten in the 2018 campaign with a record of 1-0-1, and will be back in action on March 31 when they travel to Colorado to take on the Rapids.

Both teams spent the beginning of the match getting adjusted to the other’s playing style. Columbus had the first threat of the afternoon in the 27th minute when Gyasi Zardes found an opening just outside the 18, but sent his shot well off the mark landing in the Sons of Ben section of the facility.

In the 36th minute, the captain Alejandro Bedoya created a chance of his own after dodging defenders left and right as he entered the box. Bedoya tried to put a shot on goal, but the Columbus stepped in and appeared to clear the threat while sending Bedoya to the turf in the process, and match remained scoreless.

2016 MLS Goalkeeper of the Year Andre Blake came up big for the Union in stoppage time of the first half. After a corner from Federico Higuain found Harrison Afful at the top of the box, Blake had to make a save off his volley to keep the match scoreless as the halftime whistle blew.

Columbus created the first chance in the second half after Zardes sent a missile towards the net in the 47th minute of play, but the attempt was sent right at Blake who calmly made the save. Moments later, the Union had a chance of their own, this time off a corner. Haris Medunjanin sent in a ball that found the head of a streaking Bedoya, but Zack Steffen was there to make the save.

Blake came up big again for Philly in the 64th minute, and again he denied Zardes. After a foot race with defender Auston Trusty, Zardes sent a shot on frame, but Blake yet again corralled the attempt and kept Zardes off the scoresheet.

After several attempts by both clubs to find the winning goal, it was ultimately the men in net who stood tall and left with the shutouts. For Blake, it was his 19th career shutout in just his 67th career MLS match.